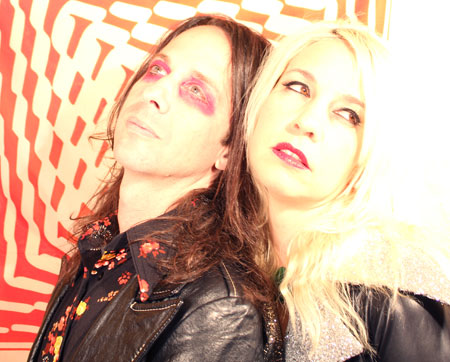 WHITE HILLS have been busy as they are about to appear in the new Jim Jarmusch film ‘Only Lovers Left Alive‘,  present new video for “I Write a Thousand Letters” shot by Delo Creative and their European Tour ever closer, read on to find out more…

Against the romantic desolation of Detroit and Tangiers, an underground musician (Tom Hiddleston), deeply depressed by the direction of human activities, reunites with his resilient and enigmatic lover (Tilda Swinton). Their love story has already endured several centuries at least, but their debauched idyll is soon interrupted by her wild and uncontrollable younger sister (Mia Wasikowska). Can these wise but fragile outsiders continue to survive as the modern world collapses around them?

Producers are Jeremy Thomas at Recorded Picture Company, and Reinhard Brundig at Pandora Film. International sales are being handled by HanWay Films.

Thrill Jockey recording artists WHITE HILLS play themselves in a live concert scene set in a Detroit Rock Club. The band spent a week in Hamburg, Germany shooting the scene, which includes Tilda Swinton, Tom Hiddleston, Mia Wasikowska and Anton Yelchin, this past July. The song featured in the film is Under Skin Or By Name from the album Glitter Glamour Atrocity.

The band first worked with Jarmusch at the ATP festival in Monticello, NY September 2010 when he asked them to perform at the festival he was curating alongside The Stooges, Boris, Sonic Youth and Sunn O))). Since then WHITE HILLS has been on a roller coaster ride which has seen them open for The Flaming Lips, Sleep and Mudhoney, as well as performing at prominent festivals such Roadburn, ATP UK and Supersonic.

During this period the band has released two critically acclaimed albums H-p1 (#10 of Rough Trade Records Top Albums of 2011) and Frying On This Rock. Guitarist Dave W was highlighted in the May/June 2012 issue of SPIN Magazine as one of the up-and-coming guitarists in rock music today.

WHITE HILLS will embark on a European Tour beginning at the end of September 2012 which will take them to Belgium, The Netherlands, Spain, France, Austria, Switzerland, Italy, Germany, Croatia, Norway, Denmark and Sweden, see below for the full tour schedule.

Only Lovers Left Alive is slated to premiere in 2013.

WHITE HILLS has also made a video for “I Write a Thousand Letters” from Frying On This Rock. The video was shot at The Womb Gallery in Oklahoma City, and was directed by Delo Creative, who is best known for his work with The Flaming Lips.