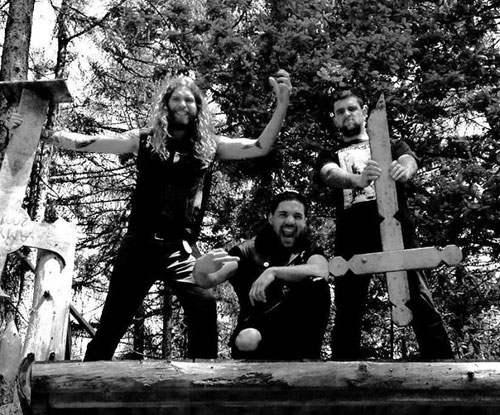 Hailing from England’s South coast WAR WOLF are a beastly heavy 3-piece whose credentials speak firmly for themselves, (being two-thirds ex-Dopefight, one third Sea Bastard / ex-Jovian).

This year’s debut 8 track EP “Riding With Demons” destroyed minds across the board and gave birth to a much needed balls-out band on the UK scene. Vehemently anti-Thatcher and outspoken against hypocritical catholic dogma / neo-fascism and economic plight, WAR WOLF blast a concentrated stream of criticism and spite into their music. But… this band also has riffs! Big gnarly riffs mixed with a giant distorted tone. Yet perfectly disjointed and stabbingly sharp to the point, owing as much to their raw talent as a general distain for all conformist ideals.

Overall, WAR WOLF are a blistering D.I.Y. punk-sludge force, reminiscent at times of the likes of early Cavity. Naturally in-your-face but additively watchable, duo-vocaled , ripping riff heavy, and a welcome breath of fresh air from the mundane. A killer 3 tracks on their side of a recent split with Sob Story (self-released through drummer Ant Cole’s own Headless Guru Records label) hint towards the immanent new full length as being an important and highly anticipated record. One that will most likely carry both the unexpected as well as another leap forward into a solid standing as a modern UK export with a giant middle finger to the hypocrisy around them, echoing the crust heavyweights of yesteryear, yet with a hardcore / doom fusion that ensures their ability to remain up there with some of the heaviest bands around today.

Definitely a kick to the head not to be missed on the Human Disease Promo / When Planet’s Collide stage at DesertFest 2014.