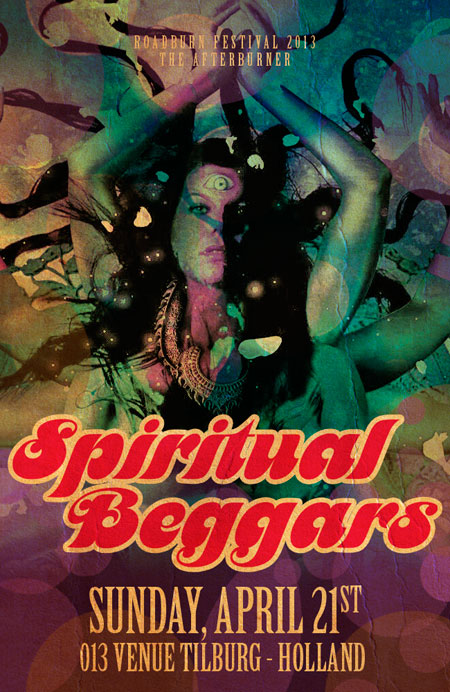 “Back in the early 90’s, Roadburn founder Walter Hoeijmakers was one of the very first supporters Spiritual Beggars had in Europe”, says Michael Amott, “His unbridled enthusiasm for our music back then when most people didn’t ’get it’ meant so much to us. It’s a great feeling to now play his fantastic festival and celebrate the staying power of Spiritual Beggars and the Roadburn concept together!  We’re releasing a new studio album and celebrating our 20th anniversary as a band in 2013, and I really can’t think of a better way to start the party than at the esteemed Roadburn Festival?!?”

Since their formation in the early 90s, Spiritual Beggars have been at the forefront of the burgeoning stonerrock scene, raising the benchmark for stoner metal bands around the globe through a succession of much acclaimed albums that redefined the genre. Whether it’s Another Way To Shine, Mantra III, Ad Astra, On Fire or 2010′s Return To Zero, which features new singer Apollo Papathanasio, all of these albums deliver a masterful homage to the rock sensibilities of Deep Purple, Rainbow, Uriah Heep or even Trouble, but also to the blistering guitar heroics of Frank Marino and Mountain‘s Leslie West.

Spiritual Beggars‘ Roadburn Afterburner appearance will mark a great return to the stage, as the band has only played a handful of rare performances over the last few years. A new album is scheduled for a 2013 release.