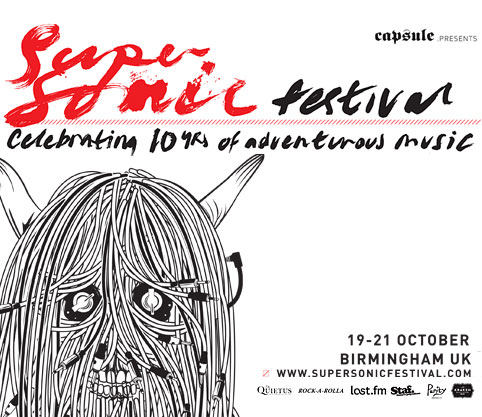 With less than two months to go before Supersonic Festival’s milestone ten year anniversary commences, we present some more worthy additions to the near-final line up. This is a testament to Capsule’s strength as curators who always shape a festival that relies not on large headline acts that others are vying for, rather offering unique and memorable performances, exhibits and films that offer a multi sensory, multidisciplinary event like no other.

In this latest announcement we are pleased to announce some more highlights of the festival as well as rounding up some more films, talks and art exhibits that have been confirmed, as ever, there is much to absorb. One such highlight we wish to divulge is Kim Gordon‘s presence at the festival, which will extend beyond her performance as BODY/HEAD as she is to present a unique art installation entitled Reverse Karaoke. This collaborative installation by Kim Gordon and Jutta Koether consists of a painted Yurt style tent housing a lo-fi rehearsal set-up with guitar, microphone, bass, and drums and a basic PA system. The visitor is invited to play the instruments and record their own music along with a pre-recorded vocal track of Kim Gordon’s voice. The track is recorded live by a sound engineer who burns two CD copies of the track, while the visitor(s) decorate two CD sleeves using materials in the gallery. One copy of the CD becomes part of the piece itself on display in a record box, and the other the visitor takes home. Reverse Karaoke was originally commissioned by Electra for ‘Her Noise’, South London Gallery, 2005.

Another highlight includes Modified Toy Orchestra, festival alumni who first performed in 2005 (some may remember the set that was cut short due to the bomb scare) and again in 2006. In 2012, Modified Toy Orchestra continue to explore the hidden potential and surplus value latent inside redundant technology; a process creating sophisticated new electronic instruments from abandoned children’s toys. They have been at the forefront of a worldwide underground movement called circuit bending, which involves rescuing children’s electronic toys and converting them into new strange and wonderfully sophisticated musical instruments. Taking them apart, they find new connections hidden within each toys circuit that reveal new sounds, thus exposing the surplus value of redundant technology. Toys are reassembled, including switches and dials with which to control this surplus value. The results of this process can be shockingly beautiful, funny and also extreme.

Though the Custard Factory remains Supersonic Festival’s spiritual home, for their tenth birthday celebrations, Capsule are extending their events to other spaces in Birmingham, embracing the city which is such an important part of what they are about. ‘The Art of Listening’ is the name of a panel which will take place at the School Of Art during the day on Friday 19 October. In partnership with Sound and Music, Supersonic present a half-day extended panel discussion exploring contexts for the presentation of sound works and performances and approaches to listening. Bringing together artists, academics and industry professionals the event is an opportunity for a discussion of how artists and producers can best stage work, how audiences can be best encouraged to enjoy it and how we can all become better listeners. Participants in the panel discussion include artist Lucas Abela (aka Justice Yeldman), music writer Frances Morgan (deputy editor at The Wire Magazine), curator Irene Revell (Electra) and Dr.Simon Hall (composer, sound engineer and academic).

Small But Hard will officially launch their label at Supersonic and will bolster an already brimming line up of label affiliated artists with the addition of Sensational (ex-Jungle Brothers member, who also features on the latest Dead Fader release). He will be performing alongside Scotch Bonnet.

In-keeping with tradition, Supersonic proudly announce the Kid’s Gigs program which will this year feature Flower/Corsano Duo and Islaja, the sole aim being to create big sounds with little people. Though really, this is fun for all the family!

Other performances we can divulge includes, Moonn (featuring Conny Prantera who exhibited last year and Mark Wagner of Sunday Mourning), part of a myths and rituals theme which will be one key thread of this year’s festival. Moonn’s performance promises to be an alluringly unconventional one, inspired by the Heavens Above, created by Mark Wagner and Sanna Charles of S&M and Conny Prantera, with the collaboration of Emiliano Maggi of Estasy, photographer Marko Righo and costume designers Kamellia McKayed and Gloria Carlos.

Continuing to embrace the locality of the festival, Soundkitchen represents a collective of composers with a background in electroacoustic and experimental music. They will present a collection of manipulated field recordings in response to myths and memories around Digbeth, the River Rea and its creatures. More on this very soon.

Finally, the emerging new band Grey Hairs featuring members of Kogumaza will perform at the ten year anniversary. What started as a fictional band to act as an excuse for the members to go to the pub on a weeknight has become something a bit more proper of late after some shows with Flipper and records in the pipeline. Even though they were probably aiming for something between Pere Ubu, Pissed Jeans and Scratch Acid it’s no surprise, with the members being kids of the early 90s, it ended up sounding like Nirvana. Just don’t call it a mid-life crisis.

The film schedule continues to grow…

To mark this milestone, Supersonic have gone all out with the film programme and have teamed up with fellow curators Network Awesome. Network Awesome’s manifesto states that “Broadcast TV has changed for the worse and isn’t getting any better – we offer something different. Network Awesome mines the resources of YouTube to bring you treasures vast and plentiful, packaged and gift-wrapped in an easier-to-watch format. Unlike regular TV, this will not melt your brain. Instead, it causes you to re-think what TV can and should offer you. Network Awesome is a real TV network located online. It’s free, it’s not full of junk and it broadcasts new shows each day. We also produce original content focusing on music, fitness, the internet, and culture – but that’s coming soon.” At Supersonic Festival, they will host a number of films from their archive as a means of simultaneously entertaining the audience whilst raising awareness of this independent forward thinking TV channel. Today we can announce their participation, entitled Blood Harvest which is a look at the wild stuff that happens way out on the back roads. Wildmen, talking animals, folk tails, and some of the culture that surrounds them all. An hour long presentation of animations, short films, and video clips that is sure to provoke and inspire.

Also hosted on the Supersonic cinema screen is Trash Humpers, a 2009 American drama film directed by Harmony Korine. Shot on worn VHS home video, the film features a “loser-gang cult-freak collective” and their whereabouts in Nashville, Tennessee. Korine remembered, as a teenager growing up in Nashville, a group of elderly peeping toms who would come out at night. He has described them as “the neighborhood boogeymen who worked at Krispy Kreme and would wrap themselves in shrubbery, cover themselves with dirt, and peep through the windows of other neighbours.”

Supersonic Festival present an exhibition hosted by local curators, Outcrowd as a perfect means of incorporating the heritage of Birmingham into the festival’s ten year celebrations. For this anniversary event, Outcrowd will present: Festival of the Rea.

Four years ago the Outcrowd stumbled upon some curious and bizarre old traditions based around the area of Birmingham’s birth place, the crossing of the River Rea, now known as Digbeth. Intrigued we delved further, eventually leading us to discover the lost Festival of the Rea, with roots in Pagan and traditional religions, echoed in similar festivals still celebrated throughout Europe. For Supersonic Outcrowd will re-create elements from the Festival of the Rea and build a shrine known as the “house of Beorn”, the first to be built in the area for over a century. A selection of artists with mythical potential will be invited to create offerings to this shrine and members of the public will also be invited to contribute their own offering to this ramshackle, weathered and sacred cabin during the festivities. There will also be a walking tour of Birmingham’s city centre, exploring the hidden history of these celebrations of spirits and beasts which can still be found in the architecture of our modern metropolis. As the sun goes down on the last night of the festival, past and present all will come together in a climax of channeled energy and sound where the magic of the event and the natural powers of the river will awaken and release the long lost spirits of the city they call home.

As a final announcement to round up today’s festival additions, Supersonic Festival are celebrating their birthday in an utterly bizarre style with the addition of life drawing, with a difference! Wildman Life Drawing is a life drawing class using a semi tame Wild Man as the model. No need to book, just drop in. The workshop will be conducted by Stephen Fowler, an illustrator and printmaker based in London. He runs printmaking and bookbinding workshops and teaches drawing at the Victoria & Albert Museum, Whitechapel Gallery, Wallace Collection, Kingston University, University of the Creative Arts and Oxford and Cherwell Valley College.

Believe it or not, there are still some more musicians and other elements of the festival to round up and complete the line up in the coming weeks. As well as summarising some of the festival’s key themes and revealing day ticket breakdowns. As we get ever closer we can see the majority of the line up coming together and I for one cannot wait for the 19 October to come around.