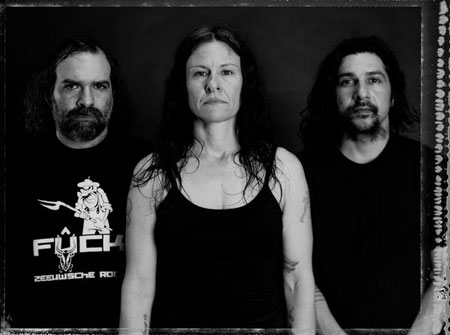 Infamous Philly avant/agro rock trio STINKING LIZAVETA have proudly joined forces with Germany’s Exile On Mainstream Records for the release of their forthcoming seventh full-length album. STINKING LIZAVETA’s near legendary cult status and blend of improvisational and otherworldly post-jazz/rock/freakout style now hitching to the exceptionally diverse purveyance of all forms of rock Exile On Mainstream’s roster already bears is an ideal alliance, and both sides are extremely excited about the signing.

Stated Exile On Mainstream owner Andreas Kohl on the signing: “I am thrilled and very enthusiastic about the Stinking ship steering into our harbor! This band has always been one of my all-time favorites since I started working for and with them for the first time approximately 100 years ago as PR dude when III came out. Now they are signed to this label and I’m one step closer to personal heaven. There isn’t many more on this stairway. I am happy. Just über-fucking happy. Welcome STINKING LIZAVETA!”

The new album from STINKING LIZAVETA will be released in the fall of 2012. More information on the album will be released over the coming weeks. This week the band launched a Kickstarter page to raise funds to help get this album off the ground. The page will remain active until mid-December; check it out now RIGHT HERE.

Since 1994 the name STINKING LIZAVETA has made its way well beyond the crusty punk and indie clubs in the band’s West Philadelphia stomping grounds where they first tore into the music scene. The trio’s instrumental, organic fusion of post-jazz, progressive rock, punk, world music, sludge and whatever else you might care to attach to their plainly distinctive resonance has become a cult phenomenon to fans of all forms of interesting heavy music the world over. Having released six full-lengths albums to date — several self-released and the others released by Tolotta, At A Loss — in addition to a plethora of EP’s, demos, compilation appearances.

While STINKING LIZAVETA’s recordings are fascinating on their own, the band is even well known for their brilliant, energetic live shows. The trio’s explosive energy is guaranteed to hit you like an electrified avalanche every time, in front of an audience of 12 or 1200, propelled through a modest setup, comprised of a drum kit, electric guitar and upright electric bass. They have toured relentlessly throughout North America, Europe and beyond over the past seventeen years alongside eclectic rock acts of all kinds along with some of the biggest and most respected names in the rock, stoner and sludge scenes including Clutch, Corrosion of Conformity, The Rollins Band, Fugazi, Zeni Geva, Today Is The Day, Weedeater, The Hidden Hand, Don Vito, The Antikaroshi, End of Level Boss, Beehoover and more. Watch for them to take to the road again throughout the coming year as they create their forthcoming seventh opus.