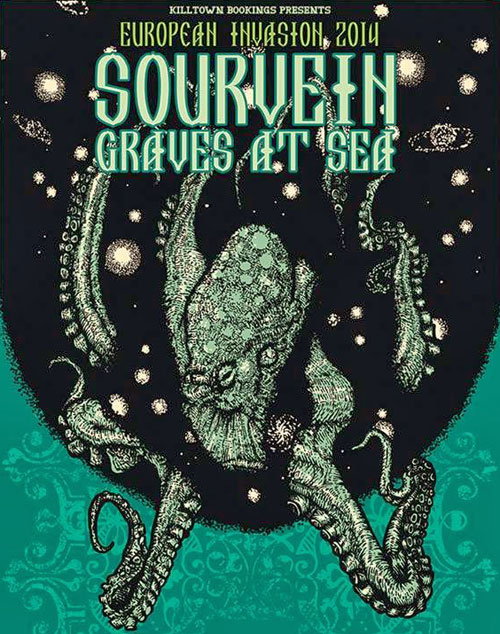 After recently destroying Roadburn Festival 2014 and currently devastating venues across Europe, two of doom metal’s mightiest of feedback-laden riff worshippers – Portland’s GRAVES AT SEA and Cape Fear’s SOURVEIN will also be hitting the UK next week!

They kick off the dates with an appearance at Desertfest London on Sunday 27th April, before hitting Sheffield then Manchester with support from the UK’s SEA BASTARD. 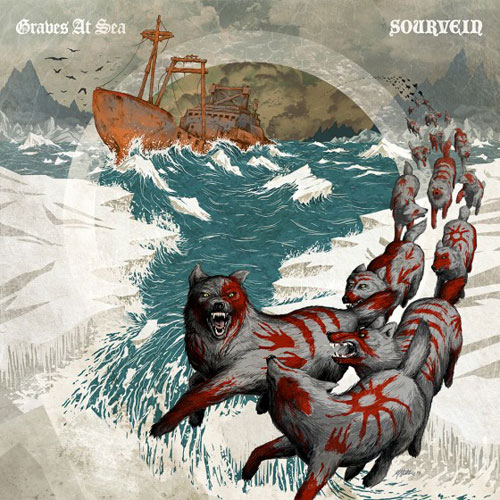 And in other news, it was recently announced that Seventh Rule Recordings will be responsible for uniting in sound, mind and spirit GRAVES AT SEA and SOURVEIN for the ultimate split of earth-smoldering amplifier worship.

GRAVES AT SEA, whose contributions leave an eerie aura complete with tortured vocals, foreboding composition, and a general sense of dread, occupy Side A. Recorded by Billy Anderson, (Melvins, Sleep, Neurosis) “Betting On Black” and “Confession” finds the all-consuming sludge for which the band is notorious, flooding in amongst the tortured howls and shrieks of vocalist Nathan Misterek.

SOURVEIN, who’ve now existed for two decades of distortion, damage and total doom, solidify Side B. With three songs produced and recorded by Mike Dean of Corrosion of Conformity, these odes of heavy combine toxic riffs, grooves and just the right amount of psychedelic appeal.

Both sides were mastered by Brad Boatright (Sleep, Beastmilk, Nails) at Audiosiege Engineering and will be released via Seventh Rule Recordings on both CD and LP on May 13th, 2014 during the two bands’ duel conquest touring Europe. The first pressing of the LP will be limited to 1000 copies and come available on 160-gram black wax with an included download code. Recommended for fans of EyeHateGod, Black Sabbath, Electric Wizard, and all things loud and fuzzy.