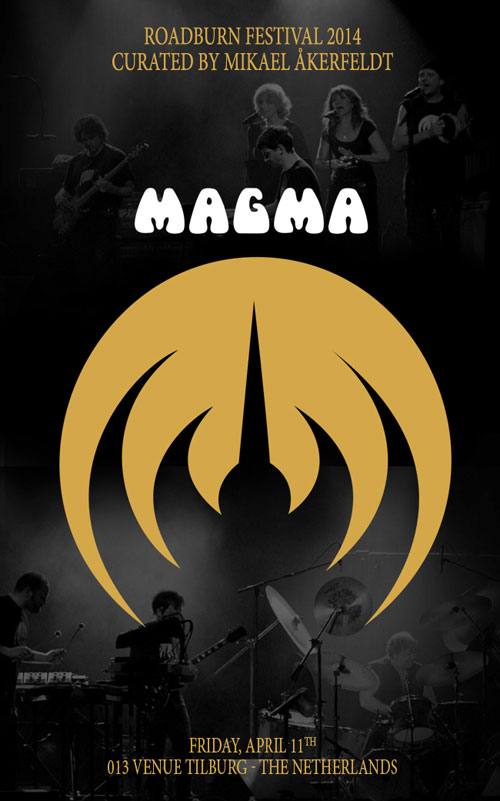 The Roadburn Crew are elated to announce that seminal progressive rock pioneers Magma have been confirmed for Mikael Åkerfeldt‘s curated 2014 Roadburn event on Friday, April 11th at the 013 venue in Tilburg, The Netherlands.

”My ”arrogance” and ”cockyness” seems well documented these days, and while it’s not completely untrue I have a definite trust in Opeth’s musical delivery I have accepted stage-defeat countless times. Playing with Morbid Angel in 1996 and playing alongside Magma in 2013 comes to mind”, says Mikael Åkerfeldt.

”Magma’s music is such an exhausting emotional rollercoaster I can’t liken them to anything I’ve ever heard or seen before ever.

While the band takes the term jazz-rock to a new level, there’ so much more to the story. I’m not sure the band themselves are aware of how much ‘death metal’ they have in their music. It’s just downright evil sounding at times. Bizarre chord progressions, time signatures that make you vomit from confusion and an emotional musical delivery that puts virtually all other bands to shame.

Virtuosity disguised between thick layers of heavy rock and darkened jazz with the ghostlike chants of Stella Vander and company on top. It’s just amazing!

I will be out in the crowd watching them with you guys. Don’t come talk to me if I have a sinister look on my face because I’ll be in my Magma-trance-bubble. It could get nasty.”