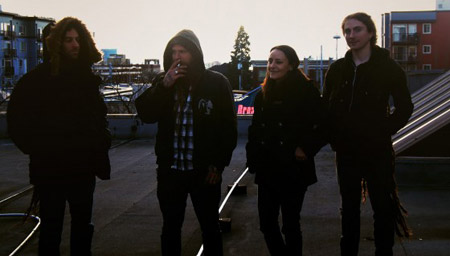 The new hymns were constructed at Soundhouse Studios in SAMOTHRACE’s hometown of Seattle with producer Brandon Fitzsimmons (ex-Wormwood) at the turn of the year, then mastered at Earhammer by Greg Wilkinson (Brainoil, Graves At Sea), the finishing touches are being put on the follow-up to the band’s acclaimed Life’s Trade debut. Bearing the title Reverence To Stone, the LP’s two extensive tracks — “When We Emerged” and “A Horse Of Our Own” — engulf nearly thirty-five minutes, presenting the unit’s revered, multi-faceted doom at its most expansive to date.

Stated founding guitarist/vocalist Brian Spinks on the forthcoming album: “Man, it’s been almost four years since our debut release Life’s Trade, but we are still alive and kicking. We’ve endured some member changes and some definite peaks and valleys in our personal lives, but we are truly stoked to be releasing our second album, Reverence to Stone working again with 20 Buck Spin. We have certainly matured in our playing and writing, but we still worship tone and the heavy. Always have and always will… We thank everyone who has hung in there waiting for something new from us. We’ve done our best not to disappoint.”

On the actual recording process of Reverence To Stone, drummer Joe Axler supplied: “Recording at the legendary Soundhouse Studio in Seattle definitely helped make the tracking come out huge, as did working with Brandon Fitzsimons who is a heavy music veteran. Besides being able to find tones and a density we were 100% happy with we were also able to experiment with noise and extra percussion to round out an album were very excited to have completed.” Added Spinks: “Working with Brandon Fitzsimons was killer. He’s family and it just made for a very relaxed session. He is easy to work with, but also does the right thing by pushing you, in some ways, to do better. I really appreciated his involvement in the process. We kept it in the family, so to speak, and had Greg Wilkinson down at Earhammer master the thing. He got the dynamics perfect and really was able to hone in on the tone. It sounds huge. We are really stoked with the end results!”

Reverence To Stone will see the light of day on CD, LP and digital download on July 31st via Olympia-based 20 Buck Spin, the label also responsible for the release of SAMOTHRACE’s Life’s Trade LP in 2008.

Following the release of the new LP the band will take to the road throughout North America. Stay tuned for a glimpse into the auditory surge fans should expect from the new album, more info on the band’s pending tour plans and more in the coming weeks.