Seattle’s riff-dredging doom powerhouse, SAMOTHRACE, is preparing to return to European soil in just over two weeks, with a new bout of shows confirmed in Holland, Denmark, Germany, Italy, France and Belgium at the very end of March and into the first two weeks of April.

The primary objective of the band’s newest tour of the European continent is forging to their introductory concert at the illustrious Roadburn Festival in Tilburg. SAMOTHRACE will hammer the audience at the massive annual event for the first time on Thursday, April 10th, performing their sophomore LP, Reverence To Stone, in its entirety alongside Beastmilk, Bong, Corrections House, Crowbar, Graves At Sea, Hull, Napalm Death, Sourvein, Whitehorse and more the same day. Additional tour dates throughout the two week venture preceding their Roadburn set are still being confirmed. For the entire tour up to Roadburn, SAMOTHRACE will be supported by Dutch outfit Dresden/Leningrad.

“We are very excited to be a part of Roadburn 2014 in our second trip to European soil,” stated SAMOTHRACE drummer Joe Axler upon the initial announcement of their taking part in the festivities this year. ”We feel privileged to be able to share the stage with so many old friends, and not only be able to play at such an amazing festival but also to see so many of our favorite bands and to be introduced to new ones as well. For Roadburn 2014, we will be performing Reverence To Stone in its entirety. We are looking forward to bringing our form of Heavy to this event!”

Roadburn Festival 2014 will run for four days from Thursday, April 10th to Sunday, April 13th 2014, as always at the 013 venue in Tilburg, The Netherlands.

To commemorate the tour, the band’s label, 20 Buck Spin, is re-pressing both of SAMOTHRACE’s LPs in colored vinyl editions, with Reverence To Stone newly available on purple and clear HERE. Their 2008 debut 2xLP, Life’s Trade, will be available by the end of March on gold/black splatter. 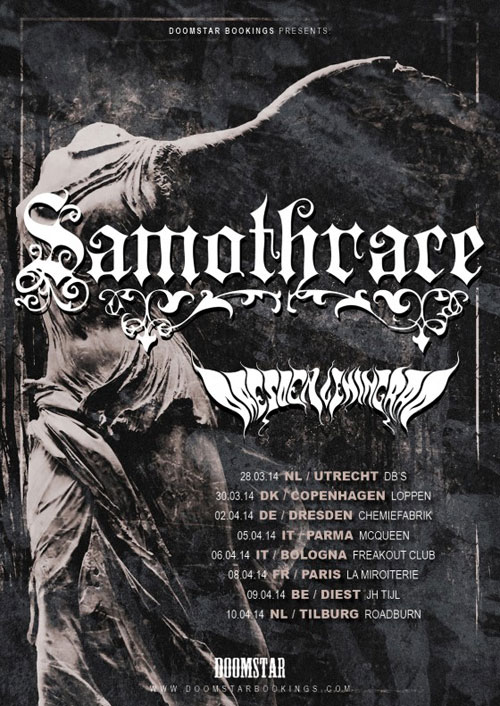