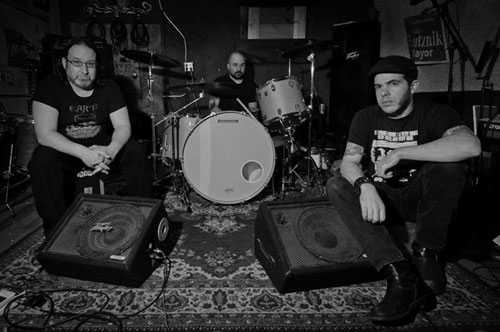 Dark days are ahead for DesertFest, as Camden’s ever blistering sun is about to be blotted out by the monumental shadow of a Black Pyramid.

Accurately self-styled as a psychedelic war metal power-trio, Black Pyramid smash together early Electric Wizard and The Obsessed and throw out a good chunk of psych in the implosion. Blazing into our lives with 2009’s skull-battering eponymous album, Black Pyramid forced the doom scene to sit bolt upright and pay attention. Three years later, almost on the eve of the much anticipated follow-up II vocalist and guitarist Andy Beresky left the band, leaving their future in doubt. Gein and Neely opted to continue, bringing Darryl Shepard into the fold and getting straight to work on their rebirth in the form of the appropriately titled Adversarial. Despite a noticeable shift in tone, Adversarial doesn’t stray too far from the core of Black Pyramid to feel alien, lacking none of the punch of the previous outings.

After disappearing into the underworld for a while, Black Pyramid are slithering back to our realm for DesertFest 2015.