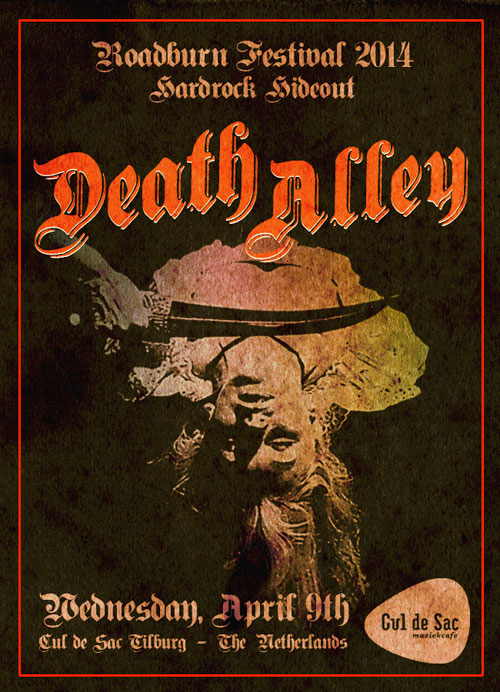 In keeping with tradition to grab a brew and honor the gods of high energy, hard rockin’ action Roadburn 2014 will kick off at Cul de Sac in Tilburg, The Netherlands, the festival’s official fourth location, with their traditional Hardrock Hideout on Wednesday, April 9th. Doors open at 8pm and admission is FREE!

Death Alley‘s debut 7″, ‘Over Under / Dead Man’s Bones’, recorded on 8 track by Orange Sunshine‘s legendary Guy Tavares and released through Van Records, could easily be mistaken for a long lost gem from the late 60s / early 70s, hailed by collectors as the holy grail of underground rock from back in the day.

In addition to Death Alley they’ll crossover into the retro-thrash movement by announcing a young Belgian band that will bring you back to the fast rude speed ‘n’ roll heavy metal days very soon. Fans of Exciter, Agent Steel, Exodus and Mercyful Fate are likely to be aroused. Stay tuned!