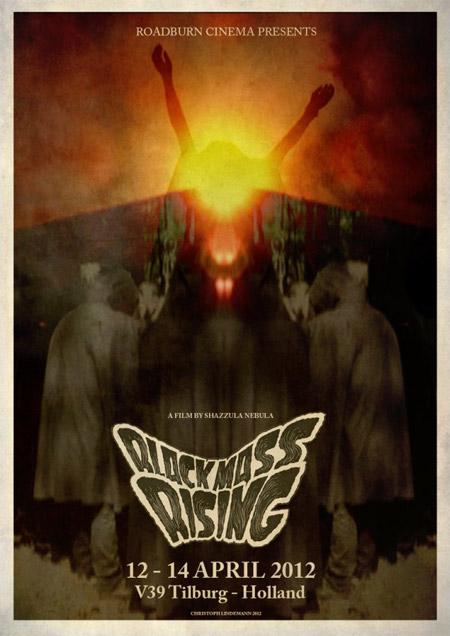 This year’s Roadburn Cinema will include Black Mass Rising, the latest creation by videographer, photographer and musician Shazzula. Comprising 22 segments that have been spliced together to produce a single film, Black Mass Rising is a feverishly tripped out and visually sumptuous ode to celebrated experimental filmmaker Kenneth Anger‘s cult classic Lucifer Rising.

She even managed to get Bobby Beausoleil to contribute to the film’s soundtrack. Currently serving a life sentence, convicted killer and Manson family associate Beausoleil was making music in prison long before anyone in today’s extreme music circles entered the jailhouse rock scene. He composed the soundtrack to Lucifer Rising behind bars (Anger’s first choice, Jimmy Page, didn’t work out).

Shot entirely using a mobile phone, Black Mass Rising is split in two parts. The first half is in color, jumping from mirrored kaleidoscopic patterns to super-8 shots of what looks like some strange coven rituals
and grainy distorted shots of robed figures in sun-dappled graveyards to gothic figure studies. The relentless soundtrack shifts from a mesmerizing rhythmic churn to abstract cosmic shimmer, heavy and heady one second, tribal and electronic the next.

Black Mass Rising could easily stand on the merit of its soundtrack alone. This is arguably the best contemporary uneasy listening compilation you will find. The addition of the imagery, however, takes it to a new level of delirium. Feast your ears and eyes on it!

Roadburn’s Cinema will be open Thursday, April 12 through Saturday, April 14 in the V39 basement.