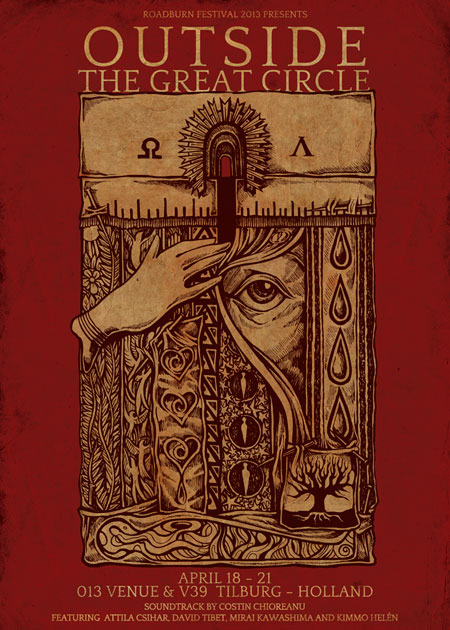 Roadburn excited to announce the screening of Costin Chioreanu‘s Outside The  Great Circle at Roadburn Festival 2013. Feast your eyes and ears on this surreal journey through the abstract depths of reality at Roadburn Cinema in the basement of V39. Outside The Great Circle will premiere Thursday, April 18th on the Main Stage at 2:30pm.

Outside The Great Circle is a new film by Costin Chioreanu, a Romanian artist known for combining dark visual art with music during his exhibitions. Now, for the first time in his career, Costin has channeled his affinity with three separate mediums into a single work. Merging music, illustration and film, the artist invites the viewer to ignore traditional structures and genre restrictions and submit to the experience of the moment completely.

A work of visual art of this magnitude required equally massive music. For the soundtrack, which was chiefly composed by the artist himself on guitar, Costin enlisted the help of some formidable musicians: Attila Csihar and David Tibet on vocals, Mirai Kawashima (Sigh) on keyboards and synths, and Kimmo Helen (Hexvessel) on violin and effects.

“All of the people gathered on this record were chosen for a very specific reason: no one else would do,” Costin explains. “Without even one of them, this soundtrack would be rendered an eyeless Mona Lisa, lacking a crucial element of enigmatic power. Attila has his unique dark voice and the ability to give the music a foundation of incredible depth, enhancing the spiritual side of music on frequencies usually left unused. David Tibet has his high timbre – charismatic, apocalyptic, angelic with an irresistible aristocratic edge. Mirai Kawashima brings a startling darkness using instruments such as his keys and Rhodes, proving once again that an open-minded Japanese metalhead playing avant-garde black metal is something special! And last but by no means least, Kimmo Helen. This polyvalent musician from Finland brings his wildly creative and experimental violin skills and unique perspective. The soundtrack was mixed by me and mastered by Attila Csihar.”

At times, Outside The Great Circle may call to mind Alejandro Jodorowsky’s violently surreal art, and the swift punch in the face of contemporary society and values is reminiscent of Jan Svankmajer’s art. More than anything, however, surrealism is the means to an end as opposed to the end itself. Not a single pixel of this film is absurd for absurdity’s sake. Every droplet, every brick, and every leaf carries profound significance, thus allowing an entire story to be told in just 13:13 minutes.