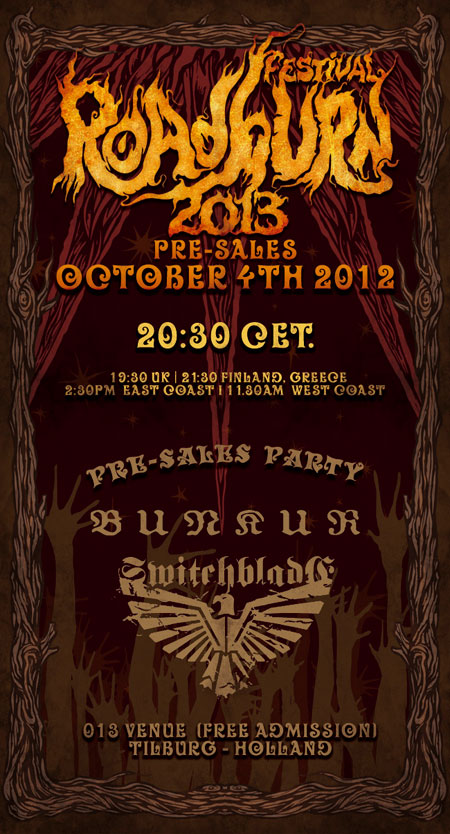 This year, Roadburn are doing things a bit differently in terms of pre-sales. Tickets for Roadburn Festival 2013 will go on sale Thursday, 4 October 2012 at 20:30 CET instead of late November as usual.

The anticipation for next year’s festival has been growing exponentially with each new band announcement, and we have been inundated with questions about tickets. Ultimately, we agreed it would be cruel and unusual punishment to make you wait until the end of November, hence the decision to move up the ticket pre-sales for Roadburn 2013 to 4 October 2012. Circle this date on your calendar, set your alarm and get ready to score your tickets!

You might remember that ticket prices for the 2012 Roadburn Festival rose due to higher taxes imposed on cultural events here in the Netherlands. In the meantime, certain changes have been made and we are pleased to report that tickets for Roadburn 2013 will be slightly less expensive. We wanted to translate that into good news for you, the beloved Roadburn veterans and neophytes alike, as opposed to raising ticket prices again. As most of you know, it was no fun announcing the price hike last year.

The majority of Roadburners live outside the Netherlands, which is why ticket pre-sales will start at 20:30 CET. This should be convenient for most time zones. Apologies to our friends in Oceania who will have to wake up early (or just stay up late)!

For everyone in the Netherlands and Belgium, we are aware that your local ticket outlets might not be open when pre-sales start, which is one reason why we are throwing a Roadburn Festival pre-sales party at the 013 venue in Tilburg (NL) on 4 October 2012. Admission is free. During the event, you will be able to purchase a maximum of two paper tickets for Roadburn Festival 2013. Guaranteed!

Just think: no pacing outside a ticket outlet in the freezing rain, no anxiety attack when the guy at the counter hands you two tickets to some eurotrash dance party at a football stadium, and no homicidal urges when the new kid at the shop mumbles: “huh, something’s wrong with the printer…”

Of course, the other reason for the pre-sales party is that it will be a blast! We have invited Switchblade and Bunkur to provide the soundtrack. Both bands have been on the Roadburn radar for quite a while, and this is the perfect opportunity to showcase their riff-heavy explorations. Also, Roadburn’s artistic director/promoter Walter Hoeijmakers will be on hand to share the latest festival updates.

Grab your tickets, bask in the heaviness and get ready to start the official countdown to Roadburn 2013!