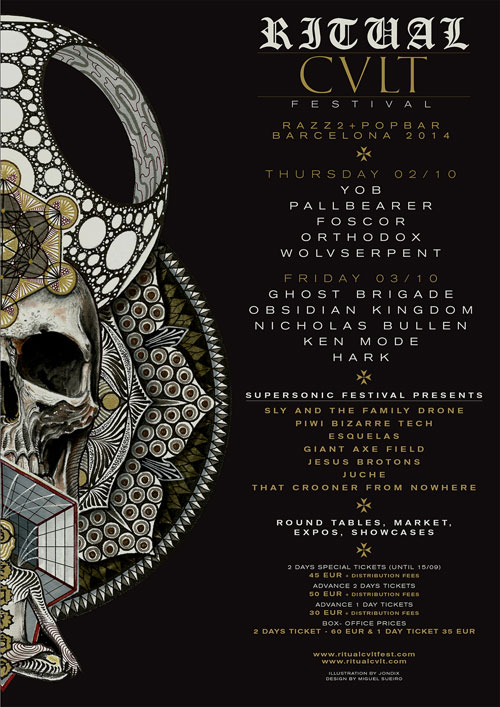 RITUAL CVLT FEST is the essence of all RITUAL CVLT parties; multiplied, developed, amplified and taken to the nth degree, it becomes the festival we were all waiting for.

Barcelona is oversaturated with musical alternatives but it still missing an ‘indoors’ festival. An event held in a fully-equipped venue that will host a festival concept far from large events drawing huge crowds that can focus on artistic and professional connections with the rest of Europe. There’s none in the rest of Spain either.

RITUAL CVLT FEST is characterized by a near and familiar approach that enables the development of other parallel activities with specific goals.

As part of their interest in developing relations in the European arena, RITUAL CVLT FEST aims at connecting professionals in the sector to promote dialogue and discuss different ideas.

As an event, one of the main interests of RITUAL CVLT FEST is that of becoming a bridge between national and international professionals with an educational aim.

There are some small format European festivals that are examples of outstanding management (Supersonic, Incubate, Amplifest, Roadburn, Inferno). RITUAL CVLT FEST wants to be one of them.

The organisers second major goal is to progressively attract an international audience by offering lineups targeted at a European audience, so to makes them less exclusively dependent on the local audience.

Pop Bar
An exclusive showcase of international and local experimental artists who travel betwen styles such as electronic, noise and vocal music. This display of artists will be personally selected by Lisa Meyer, director of the prestigious English festival SUPERSONIC, director of the exhibition HOME OF METAL as well as CAPSULE’s Creative Director.

Parallel Activities
Every festival need parallel activities that make sense of the whole. Our proposal includes conferences, round tables and debates by international and national professionals of the musical scene such as:

The moderator will be their good friend and collaborator:
David Sabaté  – Mondo Sonoro journalist and blogger

RITUAL CVLT FEST will showcase retrospective exhibits, as well as the organisation of a record fair and related merchandising.

The festival’s official poster is the work of the prestigious artist and tattoo artist, JONDIX, who has created an exclusive work of art for it.

Tickets can be purchased now from Musikaze.com.

RITUAL CVLT FEST takes place between 2nd-3rd October 2014 at Razzmatazz & Pop Bar, Barcelona, Spain and you can also stay up to date with all the latest news on the festivals Facebook Event.