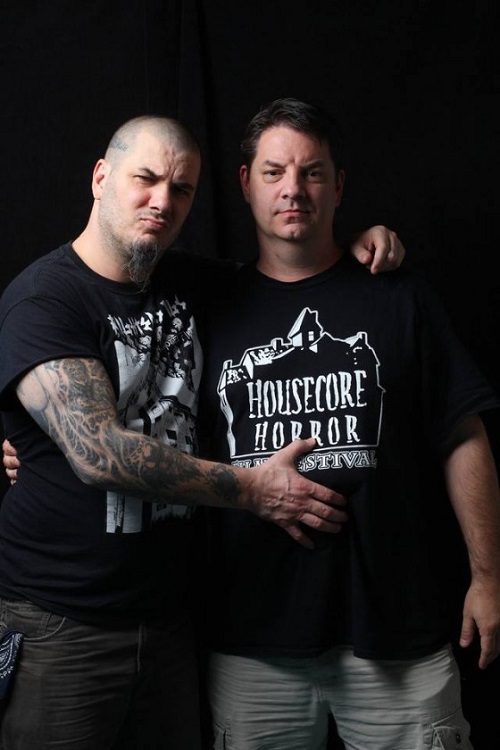 Said partner/Housecore Records head, Philip H. Anselmo, in an official statement: “This is stunning. After a weekend of incredible bands, awesome horror films and masses of fantastic people, tragically, unexpectedly, and with heart-crushing reality, co-founder of The Housecore Horror Film Festival, Corey Mitchell, passed away Monday, October 27th 2014, after the event ended. This is devastating on so many levels, I can’t and won’t go into how tremendous a loss Corey’s untimely death truly is. I was introduced to Corey first and foremost as a best-selling crime author, and shortly after that meeting I agreed to have him as my co-writer of an unfinished novel I’d been working on. It was his idea to create a horror and film festival that would became The Housecore Horror Festival. He had a vision, and no one worked harder than him to see the event through. But forget festivals. Forget books. We lost a great friend. From all of us here at Housecore Records, we extend our utmost condolences to his wife, Audra, and his two beautiful young daughters. This is devastating on countless personal levels, and I’m finding it difficult to type these lines. We lost a brother. We lost a great man with a passion for everything that we love. He will be unfathomably missed… RIP Corey. His legacy will never be forgotten, nor will his friendship. With supremely heavy hearts, we mourn. Sincerely – Philip H. Anselmo”

Corey Mitchell was a Los Angeles Times and Borders International Group bestselling author of several true crime books including Hollywood Death Scenes, Dead And Buried, Murdered Innocents, Evil Eyes, Strangler, Pure Murder, and Savage Son. Mitchell was also the founder of the #1 true crime blog, In Cold Blog, a former blogger for the Discovery Channel’s Hollywood on Crime blog, contributor to MetalSucks, and the horror film festival blogger for Bloody Disgusting. Mitchell’s eighth true crime book, Teach Me To Kill, about the murder of Diane Tilly, will be released in the coming weeks. A fund is being set up to help Mitchell’s wife Audra and his two daughters. Details to be announced soon.