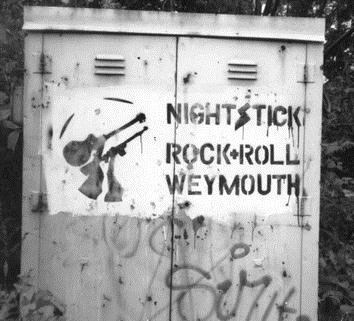 The recording you are about to witness is nothing short of an evil miracle, and testament to the irrepressibility of radical artistry in the face of torrential ill-fortune in a climate of substance-saturated, sociopathic criminality.
NIGHTSTICK…the unsung pioneers of treasonous dirge/noise, peaked…poised spiraling at the summit over the tragic, fitting and inevitable plummet into the cauldron of the consequences of their heroic hedonism.

Assembled by SIEGE drummer/lyricist Robert R. Williams from the dregs of his freakishly artistically- fertile hell-hole suburban-Boston hometown of Weymouth, Massachusetts, USA, NIGHTSTICK pissed through a 3-disc deal with Relapse before deliberately obliterating every opportunity for commercial legitimacy with a spree of live shows of zombifying dissonance. First offered rehearsal space and encouragement from AxCx’s Seth Putnam, Williams enlisted bassist/vocalist and habitual felon Alex Smith (whose offences ranged the alphabet from B&E, OUI, possession class A, B, C and D, and biting a woman’s nose), and lead-guitar prodigy, young alcoholic and acid-casualty Cotie Cowgill, supplementing the feral surrogate family with Pudoinka, a homeless, IV drug addicted-clown as choreographer, and set about getting shut off in a succession of unsuspecting dives, including the buzz-killing ‘Good Company Lounge’ debacle in 1993.

‘Rock n’ Roll Weymouth’ was recorded amidst the felonious pathos preceding Smith’s incarceration, analog, at Headroom, by Bill T. Miller (Drop Dead, Grief, Disrupt, etc.). Opening with their crown jewel of a theme song, into the celebratory ‘(Let Your) Freak Flag Fly’ epic epilogue Cotie-jam over a gig cancellation phone message, the listeners’ cast off the cliffs of the Ummagumma-worship of each musician’s solo piece, with the deep back-catalogue’s anthemic ‘Boot of Discipline’ igniting a live-to-tape version of Strauss’ Thus Spake Zarathustra’.

‘Rock N Roll Weymouth’ will be released by At War With False Noise as a six-panel digipak in October 2013 with a limited double vinyl edition to follow in early 2013, now check out the first track from the album ‘Nightstick’ below.