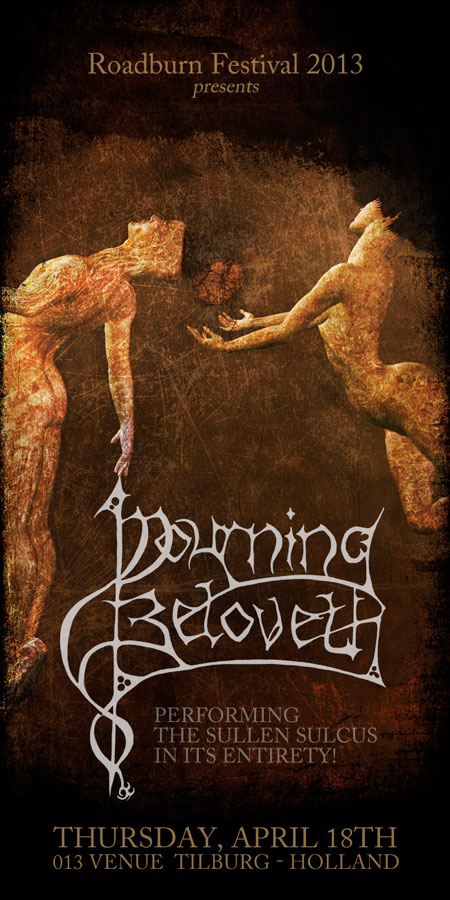 Roadburn are excited to announce that Mourning Beloveth, Ireland’s purveyors of death and doom for over 20 years, will be playing their classic second album, The Sullen Sulcus, in its entirety for the first time ever at Roadburn Festival 2013 on Thursday, April 18th at the 013 venue in Tilburg, Holland.

“It is with pleasure we announce our participation in Roadburn 2013 and to mark the occasion we have decided to play, in full, our 2003 album The Sullen Sulcus”, says Mourning Beloveth‘s Darren Moore, “We have spoken among ourselves over the years on doing a set dedicated to one album and now seems the perfect opportunity at a festival dedicated to the eclectic and underground movement in metal. This will coincide with the first official release of The Sullen Sulcus for the first time on vinyl with revised artwork. So bring your nightmares in red and enjoy our set, we may even have another surprise in store on the night.”

Hailed as one of the best doom metal albums ever made, The Sullen Sulcus embodies the genre at its slowest and heaviest best. There are no bluesy riffs or doomy grooves to be found here. Instead, Mourning Beloveth excels at traditional doom metal with pronounced riffs and miserable guitar harmonies, followed by sorrowful melodies, tortured guttural vocals and despondent clean vocal passages, devoid of light.

The arrangements on The Sullen Sulcus are far from conventional, with repetitive passages cyclically enhancing the pure sonic depression that characterizes this leaden slab. Each song is a complex narrative of anguish and despair, building up from the beginning and peaking towards the end. It feels like digging a grave where you know hope is buried, yet all attempts to find it are futile.