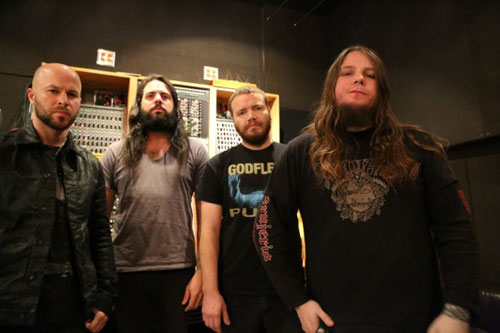 Delivering some of the most bottom-dredging, soulless, nihilistic metal imaginable, built of the most slamming chords and grueling buildups and penetrated from every side with the most corrosive vocal tirades, the Chicago-based anti-life quartet truly lives by a code of depravity within a wealth of anti-human views. The members’ hatred for the world exists even within the unit; turmoil within the ranks of LORD MANTIS is a constant factor. Outspoken bassist/vocalist Charlie Fell is the first to admit this, and lends a bit of insight into the clan’s contemptuous scrutiny of our decaying society in an exclusive feature at Vice Magazine’s music outlet, Noisey, running alongside a premiere of “Body Choke,” the opening aggressor from Death Mask. Warning; this is not for the feeble at heart… the tune or the feature. 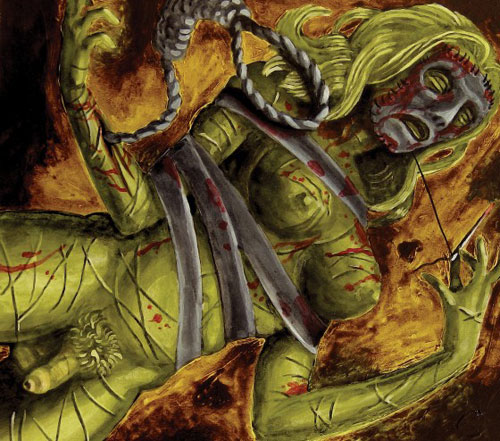 Death Mask will see release on April 29th, the band’s first release for Profound Lore Records. LORD MANTIS has culminated their contempt for humankind and some of the most horrific personal experiences over recent years into an exceptionally malevolent entity on Death Mask. Dredging forth their most disturbing works yet, and unleashing something far darker even than their iniquitous prior LP’s released via Seventh Rule and Candlelight, the visceral punishment one will endure on the seven works of Death Mask is not for the weak. The fifty-minute album was recorded with Sanford Parker (Twilight, Voivod, Eyehategod, Yob) at Chicago-based Electrical Audio and Soma Studios, also responsible for engineering both prior albums. Indian’s guitarist/vocalist Dylan O’Toole also contributed additional vocals on two of the tracks on Death Mask, adding yet another dose of nihilism to the record, which bears the warped cover art of tattooist/musician Jef Whitehead (Leviathan, Twilight).

Amidst regional shows over the coming months, LORD MANTIS will tour out to the East Coast confirmed to raid this year’s Martyrdoom in NYC alongside Mournful Congregation, Lycus, Vilkacis and Evoken on July 1st — one of the massive five days of the event. The full tour routing will be announced in the coming days.