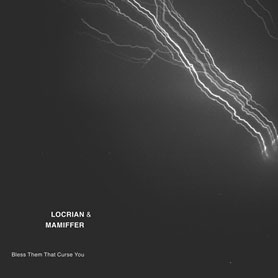 “Bless Them That Curse You” is the anticipated collaboration between two of the most respected bands in the realm of experimental/progressive music today, namely MAMIFFER and LOCRIAN.

Chicago, Illinois LOCRIAN have been known to create prolific and genre defying and mesmerizing works within the realm of experimental music that they are now seen as one of the most in-demand bands within the field.  By creating waves of epic ambient noise mixed with elements of such genres as black metal and soundscape drone, LOCRIAN have developed a body of work that has only been progressing more and more since their inception.

MAMIFFER was initially founded by artist Faith Coloccia after the disbanding of her experimental project Everlovely Lightningheart,  With MAMIFFER, Faith began to focus more on songwriting through the paino, fusing neo-classical elements and then incorporating ambient electronic hums and reductionist metal dirge.  With MAMIFFER, Faith had collaborated with a myriad of musicians but found a steadiness with her main MAMIFFER co-conspirators Travis Rommeriem and her partner Aaron Turner (of ISIS/Hydra Head Records).

With “Bless Them That Curse You” (recorded at Steve Albini’s Electrical Audio studios in Chicago and mixed by Randall Dunn in Seattle), LOCRIAN and MAMIFFER have fused their unique styles together to create something of wonder and awe, an elegant and beautiful marriage of the many layers of sound present within the vast sound canvas both bands have laid forth to bring such a collaboration to fruition.  A collaboration that had even exceeded and gone much further than what each band envisioned and expected when the mere thought of collaborating arose; a musical collaboration from two forward-thinking bands that was destined to happen.

GURT: Debut EP ‘Redwin’ To Be Issued On Limited Vinyl Via When Planets Collide