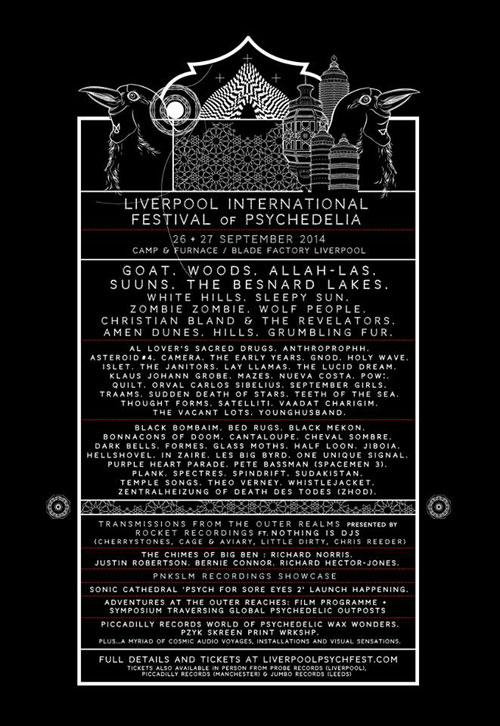 The build up to this year’s Liverpool Psych Fest has just increased in temperature with the final swathe of head-spinning artists announced for the bill….

ALLAH-LAS, THE BESNARD LAKES, CHRISTIAN BLAND & THE REVELATORS and GRUMBLING FUR will join GOAT to headline the 2014 edition of The Liverpool International Festival Of Psychedelia. Also included on the bill for this year are QUILT, NUEVA COSTA, THE VACANT LOTS, TRAAMS, SPINDRIFT, SEPTEMBER GIRLS, SPECTRES and ASTEROID #4. These additions join an already scintillating, globe trotting line-up.

As well as this amazing music offering, we are pleased to announce the following elements that will be taking place at this year’s festival:

+ PSYCH FOR SORE EYES 2 LAUNCH
Sonic Cathedral and Heretic join Liverpool Psych Fest for an audiovisual treat to celebrate the release of ‘Psych For Sore Eyes 2’ – the eagerly-awaited follow-up to the genre-defining EP which combined psych rock thrills with 3D screenprinted spills to great effect – which will be available for the first time at the festival. This is in addition to curations by Rocket Recordings and PNKSLM.

+ ADVENTURES AT THE OUTER REACHES
Psych scenes, communities and festivals are flourishing across the globe; from the occult psych scene of Rome, the Stockholm set and the amazing bloom of shimmering, stargaze psychedelia in Santiago, Chile. ‘Adventures At The Outer Reaches’ is a symposium and cinema programme set to explore these scenes through conversation and debate with their key protagonists, alongside films produced by and inspired by such communities.

+ PZYK SKREEN PRINT WRKSHP
The festival’s very own PZYK Skreen Print Wrkshp will feature artwork from some of the world’s best illustrators and designers working within the psych genre, alongside live screenprinting, giving festival goers the opportunity to press their own unique prints.

Weekend tickets for the 2014 festival are on general sale NOW and are available HERE.