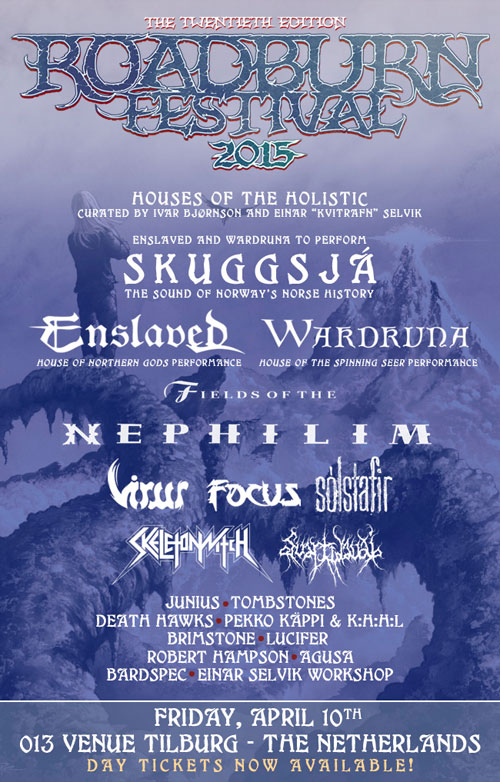 Roadburn Festival 2015‘s curators Enslaved‘s Ivar Bjørnson and Wardruna‘s Einar “Kvitrafn” Selvik have completed the line up for their event on Friday April 10.

A mystical and shadowy shroud will fall over the main stage at Roadburn as the industrial darkness of  Fields Of The Nephilim sits alongside the powerful, beating heart of the Nordic countries’ brothers in music: Skuggsjá, Enslaved, Wardruna, Virus and Sólstafir. Coming together under the banner of Houses Of The Holistic, the curated day at Roadburn 2015 will provoke and captivate in equal measure.

Both the Green Room and Stage01 will elaborate on the eclectic tastes of Bjørnson and Selvik, taking you on a spiraling journey into Progrock, (Black) Metal, Ancient-folk and Psychedelic territory. Prog legends Focus will be leading the charge, along with Svartidaudi, Tombstones , Junius, Robert Hampson, Skeletonwitch, Lucifer, and  Pekko Käppi & K:H:H:L among others.

BardSpec – the Ambient project / band from Enslaved composer / guitarist Ivar – will also perform at Houses Of The Holistic. Einar will present a workshop which will delve into his approach to music and the extensive creative concept behind Wardruna’s ongoing ‘Runaljod’ trilogy.

“I’ve got to admit to feeling a streak of melancholy as our “Houses Of The Holistic” is completed with so many wonderful bands. It is humbling to have been given the honor of curating the Roadburn Friday, and also it has been a process that has given me a massive boost of belief in, and love for, this music scene that we’re all rambling around in: every invited band has been massively supportive and enthusiastic in accepting our invites.

It is also important for me to extend a massive thank you to my two main co-conspirators in this evil planning: Einar Kvitrafn of Wardruna, my co-curator and musical sparring partner par excellence. And then of course Dr. Evil himself: Walter from the Roadburn organization itself – for guiding us through the process and for having faith in our abilities. After all, we are musicians and shouldn’t be trusted with too much grown-up stuff haha! See you all in Tilburg!” —  Ivar Bjørnson

“The line-up for our curated Roadburn day is now complete and I personally think it is insanely good! ‘Houses of the Holistic’ will display a broad variety of acts that despite the spectrum of expressions and genres still manage to compliment each other as well as firmly grip to a solid red line. It will also reflect the curators and their past, present and future.
A huge thanks goes out to Roadburn, and of course my partner in crime Ivar Bjørnson. It has been a pleasure and honor to work on this so far and the festival haven’t even started!” — Einar “Kvitrafn” Selvik.

Roadburn Festival 2015 will run for four days from Thursday, April 9 to Sunday, April 12 at the 013 venue in Tilburg, Het Patronaat and Cul de Sac in Tilburg, The Netherlands. Get your tickets HERE.