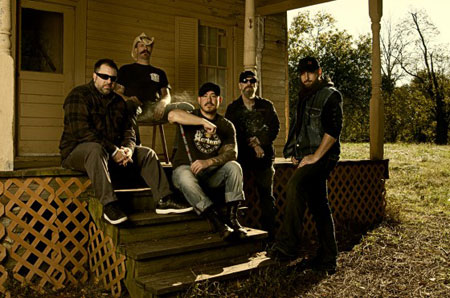 In support of the mammoth Dismal Hollow’s unveiling, The Obelisk are celebrating the day with a full stream of the entire album now! Fans can also sign up to win a KING GIANT prize pack, including a signed Dismal Hollow LP, a Marshall KT66 power tube USB drive from Power Tunes (the brainchild of Will Sprague of The Crimson Electric) loaded with a Southern Darkness and Dismal Hollow, and more.

Check it all out RIGHT HERE!!

Rue Morgue Magazine recently premiered of the first single from Dismal Hollow, “Appomattox,” the video capturing a gritty, apocalyptic, backwoods zombie attack which can be viewed below. The album was also featured as “Album of the Day” on Roadburn’s official website.

KING GIANT is in the process of lining up select dates and touring for later in the year to be announced as they develop.

Dismal Hollow can be purchased worldwide at Best Buy, FYE, Amazon, Music Direct, Barnes and Noble, Newbury Comics, Soundstage Direct, CD Universe and many others, and in Europe via HMV and Plastichead.