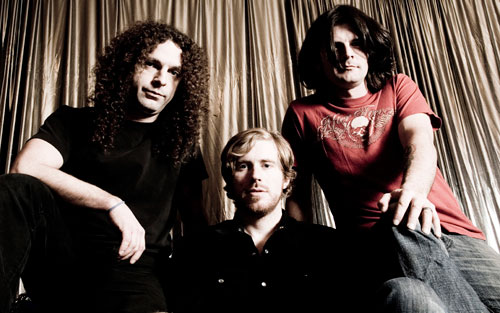 You wanna talk about riffs?

Because if we’re talking about one single catalogue of riffdom that’s so vast it needs its own warehouse to contain it, then in The Atomic Bitchwax you’re looking right down the barrel at your three foremen-in-chief.

‎The New Jersey veterans started out in 1993 with Chris Kosnik on bass and vocals, Keith Ackerman on drums and Monster Magnet’s Ed Mundell on axe duty. A supremely jam-based, psychedelic affair‎ but with a stoner aesthetic, this line-up put out the hippy, trippy (but riffy) TAB1 and TAB2 records. After Mundell handed in his notice to concentrate on the success of the ‘Magnet, enter one Finn Ryan; the dymanic, shredtastic gun-slinger, once of the band Core. With Ryan on board and taking a noticeable step up in speed and flamboyancy, TAB3 is a masterclass in hard rock and uber-catchy songwriting. As Ackerman also left the fold, the Monster Magnet association subsequently strengthened with the devastating impact of “Monster” Bob Pantella’s installation behind the kit. The TAB4 release was surprisingly a slightly more sedate, fun-focussed record that zoned in on a more commercial sound with songs like Revival and Sometimes Wednesday.

And so with a new record (probably titled TAB5!!) in the works for 2015, what better time to welcome one of the stoner scene’s premier live bands to the DesertFest fold. Get down the front for this – your face will be the only thing melting faster than The Atomic Bitchwax’s liquid lava rifforama.