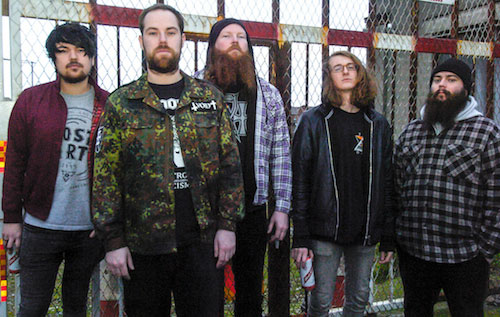 Scouse sludge lords IRON WITCH will head into the studio this Sunday, 3 August, to start demoing material for their debut album.

Since completing their headline tour of the UK, playing shows with the legendary Crowbar and making an appearance alongside the resurrected Send More Paramedics at TDON 10 earlier this year, the five piece have quietly been chipping away at their long awaited debut full length.

The quintet from Liverpool will enter the studio, with good friend Steve Kent in the recording chair, to start demoing five potential album tracks; including Down To Zero and IX Steps which were aired on the band’s headline tour back in February.

IRON WITCH will also be taking a brief break from working on their upcoming album next month to play two headline shows in Bolton and London. The five piece will headline Riff Fest at Bolton’s Alma Inn on Saturday 23 August, playing alongside the likes of Widows, Bong Cauldron, Exxxekutioner, Swinelord, Siege Mentality and more. Before returning to the capital on Saturday 30 August to close proceedings at When Planets Collide’s Summer Sizzler Session. IRON WITCH will headline the second night at The Windmill in Brixton alongside Dieselking, Grifter, Pist, The Elephant Tree and The Bendal Interlude.

Commenting on proceedings, IRON WITCH bassist Rick Owen said: “We’re getting pretty close to finishing the album now, so we thought it would be a good time to demo the tracks we’re 100% happy with before playing Riff Fest and the Summer Sizzler at the end of August. We also want to say thanks to everyone for their patience and continued support while we’ve been locked away in the practice tomb over the last few months.”

In the meantime, you can stream Hangover Suicide below which was release on 7″ via Endtyme Records last year: