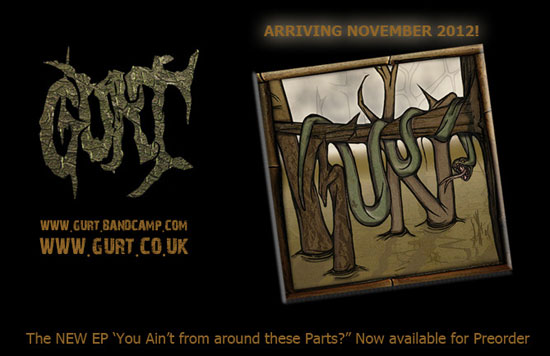 Any follower of GURT’s actions will have noticed that this year has meant a significant line up change within the band with Jamie McCathie (Guitar) and John Hughes (Bass) exiting the band at the end of 2011 to travel to foreign pastures to live. This has meant that new recruits in the form of Rich Williams on guitar (of Sedulus fame) and David Blakemore on Bass (who has filled in on previous gigs) have taken up the challenge of replacing 2 of the founding members…. And WHAT A JOB THEY HAVE DONE!!

Anyone who has had the chance to see the new Version 2.0 of GURT will now see how well the 4 have connected and a new found energy has been used into producing a brand NEW EP for all to hear before 2012 is over! In order to complete the transition in an interesting way this recording of songs will feature both Jamie and Rich on guitar duties and will feature 5 members on the songs featured…

The ‘You Ain’t From Around These Parts EP’ features:

Pre-orders are available now from www.gurt.bigcartel.com ahead of release in early November and will only be available on CD format produced independently by the band.

As well as the CD release you can order a special Edition Release pack which features:

1: A copy of the ‘You Ain’t From Around These Parts EP’ CD.
2: A special edition T-shirt featuring Front and Back design.
3: A Limited Edition woven patch featuring the Band logo.
4: A sticker and badge pack based around the New artwork.

Watch the Trailer for the new release that details whats featured in the ‘Special Edition Pack’ below: