So after months of hard work, GURT can finally unveil all the details of their debut album ‘Horrendosaurus’ which is set to be released on Monday 9th May via When Planets Collide: Presents.

This new collection of songs will feature on both CD and Vinyl as well as various other pre-order packages featuring new shirts with artwork from both Dominic Sohor and Alan o’ Neil.

Once again recorded at Loud Noises Production with Owen Davies and Mixed and Mastered by Nick Kinnish of Serafina Studios, this team really got the best out of GURT and have created something truly monstrous, to add to that it features amazing original artwork from their good friend Dominic Sohor. 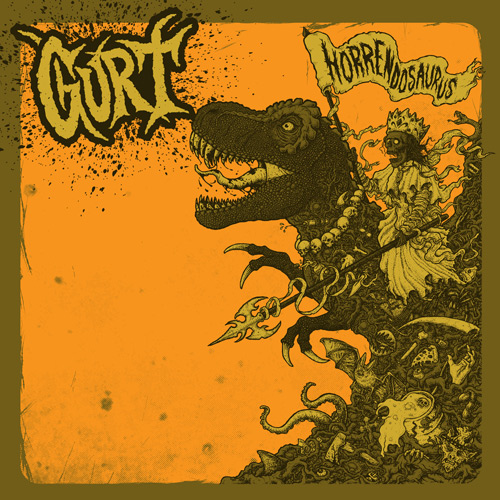 Anyone who pre-orders the album from the band direct or via When Planets Collide will instantly receive a download of an exclusive track, the bands studio version of Sex Pistols ‘God Save the Queen’ that will not feature on the album.

The Ultimate Edition of the album will feature:
– Featuring Signed CD or Vinyl album
– Both Shirt designs
– Patch
– Exclusive Sticker

Plus an exclusive ‘Flat Pack’ shirt (designed by Dominic Sohor) that only will be printed for this special set and not available anywhere else!

All orders come with a toy dinosaur and free download of the album on day of release.

So go to either GURT or When Planets Collide webstores to pre-order NOW!

And don’t forget, GURT will be playing the Desertfest London Pre-Party tonight at The Black Heart, Camden along side psych stoner troop SEDULUS and gargantuan newcomers MEGALODOOM, more info on the facebook event HERE.