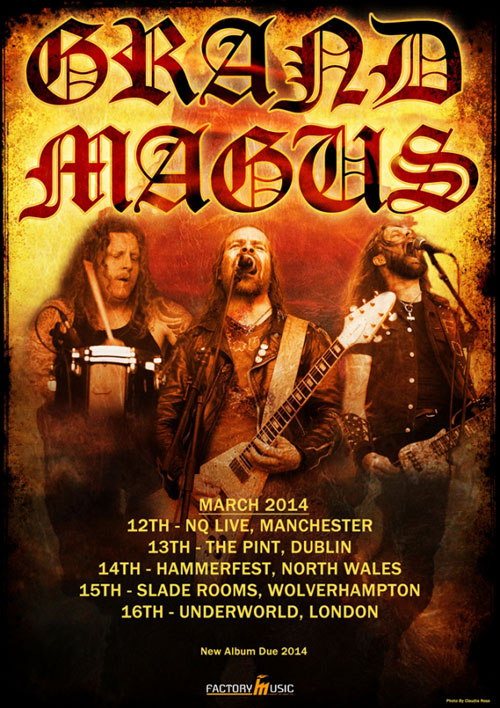 After the highly-celebrated release of sixth studio album, ‘The Hunt’, Swedish riff gods GRAND MAGUS are heading back to the UK/IRE to embark on a 5 date tour in March 2014. The Swedish trio have always stuck to their own path of natural evolution – they’ve never casted off their early days’ groove nor their love for epic doom and extreme metal. These trademarks are now being paired with traditional riffs and melodies that rock in the same qualitative league as Judas Priest or Dio.

With a new album due for release early 2014, this will be a great time to catch these Vikings at their finest!

The band had a few words to say about this upcoming tour;
“Warriors! When we last ventured across the sea to bring our steel to the UK and Ireland, our hearts were filled with joy from your response. It gave us such a rush that we wanted to come back as soon as possible. Well… We’ll be back in March! Expect the most ferocious viking power shattering the clubs and the, for us, aptly-named Hammerfest! Valhalla awaits!” – JB, Fox and Ludwig

The UK/IRE tour dates are as follows which also includes a performance at the annual Hammerfest in Wales – click through for tickets!