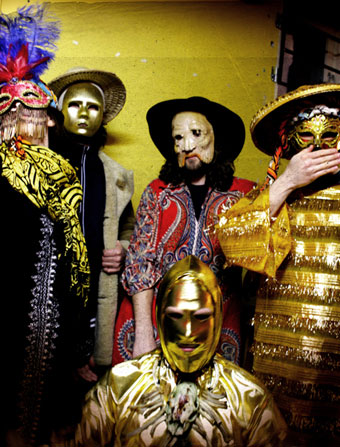 GOAT became one of the most talked about bands in 2012 due to the success of their extraordinary debut album World Music. Rocket Recordings are proud to announce this double ‘A’ side single, the first release of new music from the band.

GOAT hail from the historical but little known about Northern Swedish village of Korpolombolo, where these two new tracks were written and recorded. And like many of the tracks off World Music, the resonance of the village’s voodoo past can be heard throughout these grooves.

The ‘A’ side entitled ‘Stonegoat‘ continues right where World Music left off with fuzzy wah guitars, relentless djembi rhythms and banshee screams. The under three minute track climaxes with some seriously heavy fuzz that consumes the whole song.

The ‘AA’ side sees GOAT broaden their palette on ‘Dreambuilding‘. On the surface it is business as usual; infectious tribal grooves, fuzz and dual vocals. But after a couple of listens the true beauty of the tracks deep funk groove is released and reveals an even more structured side to Goat’s loose way of making amazing music. 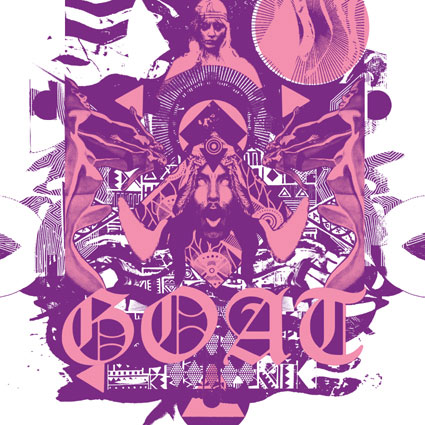 Live shows by the band are rare. But they will be heading to Europe, following their two week American tour in April and May, with a series of festival appearances. These include Primavera, Roskilde, Way out West, Airwaves, plus several others. GOAT will also be visiting the UK to play an already sold out show at Camden’s Electric Ballroom on 27th June. After that they will be heading down to Glastonbury Festival to play two sets in what will be the perfect spiritual location for their tribal-psych sounds.

‘Stonegoat’/’Dreambuilding‘ will be released on 3rd June 2013 on Rocket Recordings.

Luke Insect is responsible for creating the eye melting illustration that houses this great 7”.