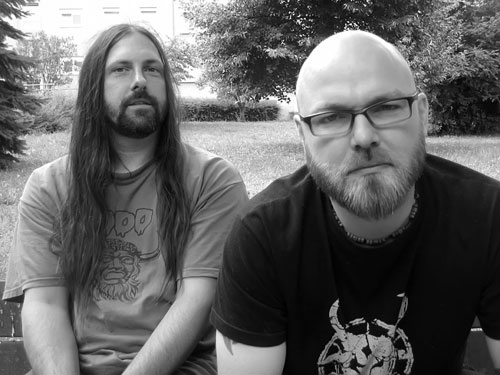 The gnarly riff-wrenching stoner rock duo BEEHOOVER are back in a big way – whilst the world regains composure following the clout delivered on their recently released, and fourth full-length album The Devil And His Footmen, the German drum and bass commanders have been preparing for their UK tour. Across nine days, BEEHOOVER will travel far and wide, showcasing their hybrid, barking sludge – quite unlike anything you will have experienced before.

Who better to describe BEEHOOVER‘s musical creations than their label manager, Andreas Kohl? – “One of my most loved descriptions in music history for a tonal impact is Southern Lord’s comparison for Warhorse’s sound with the feeling of being beaten with a wet mattress. For BEEHOOVER I could pack a gargantuan pile of descriptions on the table, ultimately I would describe my listening experience like being wrapped in plastic foil, unable to move but struck in awe facing an enormous T34, while a Stalin organ is shooting roses across the tundra, explosives that draw a dreamy coloured fireworks on the night sky” …Kohl continues…”In the crowd, what you see is hair, just hair behind the drums and contrails from swirling drumsticks. Centred is one barefoot Urviech covering the room with noises you can’t escape from, breathing, drinking, eating and farting riffs in a quantity and variety that 15 bands could live and ride off for the next one hundred years. Rhythms, riffs, beats, songs, sounds – so emotional, glowing in urgency, blasting on your senses so that you get an overdose of endorphins just from watching this monstrous mother of all concerts, exploding like an earthquake that rips continents apart. Yes, this is what it sounds like: I love this band. Every single time I see them. I pity you if you’ve never had the chance – make your life complete and take the chance now. If there’s one band you’ve really got to see EVER – it’s these guys!” 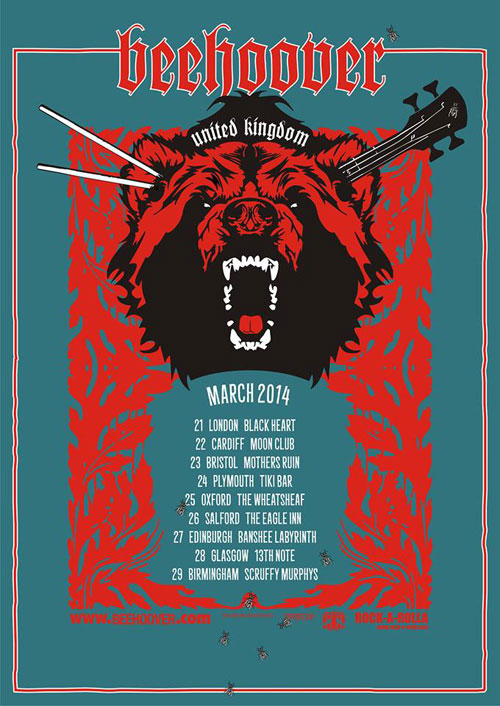 BEEHOOVER’s latest album, The Devil And His Footmen (review here), is a swirl of raw, sultry tones and rumbling octaves that strike chords with braggadocio 70’s hard rock as much as it does the thunderous rumble of Black Cobra and the jutting angles of Unsane. BEEHOOVER are at their most rocking here, tangling the long hair of the headbangers with all the genres of beard in one matted toupee of oddball rhythms and histrionic vocals. BEEHOOVER buzz with eccentric electric – come along, grit your teeth and enjoy the sting.