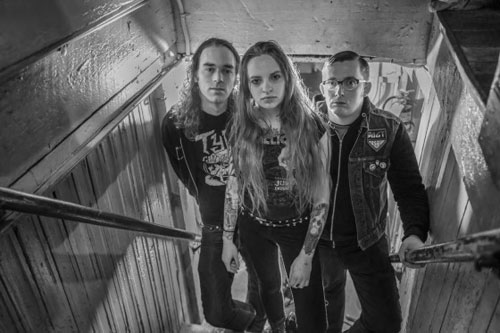 Following recent broadcasts informing the public of ENABLER’s deadly revamped lineup and impending East Coast tour, the Midwest-based trio now expose the details on their anticipated second full-length release, La Fin Absolue Du Monde. Translated from French to signify “the absolute end of the world,” the title of the new album is yet another of the band’s works inspired by filmmaker John Carpenter, in this case in referencing his movie, Cigarette Burns. La Fin Absolue Du Monde was tracked with Shane Hotchstetler at Howl Street Recordings in Milwaukee (Expire, Northless) and mixed by Steve Austin (Today Is The Day) at his Austin Enterprises, and packs the band’s most diverse material to date into a thirty-six minute battering with fourteen tracks.

ENABLER has partnered with several close allies to wage this new battle in a collaborative strike. Proudly going to war as part of the La Fin Absolue Du Monde campaign are San Francisco-based Creator-Destructor Records as well as NYC-area-based The Compound. Creator-Destructor has released titles from The Funeral Pyre, Gypsyhawk, Heartsounds, VYGR and others in addition to the vinyl version of ENABLER’s 2012 debut LP, All Hail The Void, which came out on CD and digital platforms via Southern Lord. The Compound, the label faction of media/PR faction, The Earsplit Compound, unleashed ENABLER’s rabid 2013 Flies EP and is currently unloading physical versions of new releases from Godhunter, Cop Problem, Die Choking and others. La Fin Absolue Du Monde will see killer deluxe CD and vinyl pressings and will see North American release on May 27th, just one day after ENABLER marks their debut invasion of the annual Maryland Deathfest. 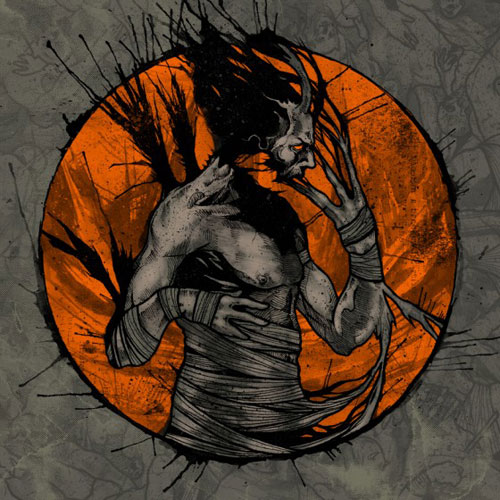 Stated founding guitarist/vocalist and chief songwriter, Jeff Lohrber, on the current state of ENABLER: “This record is one of the proudest moments of my recording career. It’s a record made by a full band, and it sounds like a band playing. That is something that is lost in modern recording and is slowly becoming a thing of the past in the modern world of music. I feel alienated by it and I’m pissed about it. I recommend turning everything all the way up while listening to it.”

Stand by for more info, tunes and preorders for La Fin Absolue Du Monde to be posted in the coming days. For now order Flies on CD/vinyl RIGHT HERE; European/international fans can order the vinyl HERE.

Over the past two years, ENABLER has followed their All Hail The Void LP with widespread touring of North America, Europe and Australia, and unloaded their Shift Of Redemption EP via Think Fast! Records and Flies EP via The Compound, both in 2013. The band’s first full-time drummer since the departure of Fall Out Boy’s Andy Hurley in 2012 is now realized with Ryan Steigerwald (The Ox King, Ringworm live/fill-in drummer) who joins bassist/vocalist Amanda Daniels and founding guitarist/vocalist Jeff Johrber. They’ll now take these new hymns of disapproval out on tour straight through the release of La Fin Absolue Du Monde and the rest of the year, beginning with a massive East Coast headlining run beginning April 10th. ENABLER will trek eastward on your, joining with The Compound labelmates, Cop Problem, at the sixteenth  New England Metal & Hardcore Festival in Worcester, Massachusetts on April 17th, followed by four more shows together before ENABLER forges homeward. A plethora of newer shows through the Summer are also being confirmed, many of which are also listed below. Additional tours will be announced in the coming days. 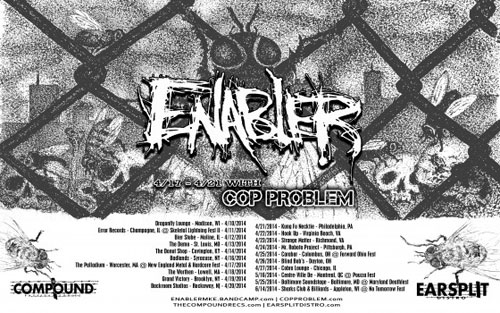