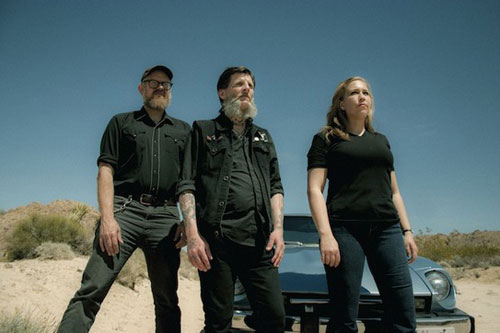 As EARTH traverses onward through the South Pacific on their ongoing tour through Japan, New Zealand and Australia, building up to the release of their tenth magnum opus, Primitive And Deadly, Pitchfork has unveiled the very first single from the LP as an early surprise to the band’s incredible international fanbase.

Open-minded music fans the world over have succumbed to and praised EARTH’s pioneering, visionary views on delivering their slow-motion anthems since the Sub Pop albums of the early 1990s, and when their revamped lineup returned in the early 2000s with a more Americana-inclined direction, entire new hordes of listeners began paying attention. Now, nearly two-and-a-half decades into their pioneering ways, the band prepares to release Primitive And Deadly, a sprawling and epic, very diverse collection of songs which flow seamlessly, and while revisiting some of their earliest works, explores massive new territories.

The third of the six movements on the hour-long Primitive And Deadly is delivered to the masses by way of the sprawling eleven-and-a-half minute “From The Zodiacal Light,” now playing at Pitchfork. “Near the minute mark, EARTH incorporates one of the biggest shocks of their quarter-century: a vocalist, one of the first to lace around their instrumentals since Kurt Cobain. Rabia Shaheen Qazi, who leads the psychedelic Seattle eclectics Rose Windows, becomes a bewitching presence,” the review of the track and first true foretaste of the album states. “And Earth, now a pristine machine of a veteran band, doesn’t falter in fitting her into their mix. They find space for the song, just at the lip of their unwavering rhythm and the riff.”

Detach from everything else and tap into “From The Zodiacal Light,” as well as view the striking cover created by Samantha Muljat for the first time via Pitchfork at THIS LOCATION.

Southern Lord will issue Primitive And Deadly in all deluxe formats in North America on September 2nd, and in Europe September 1st; pressing details will be released alongside pre-orders and more in the coming weeks. In the meantime, Hex; Or Printing In The Infernal Method and The Bees Made Honey In The Lion’s Skull are being reissued on LP next week via Southern Lord; Hex available HERE and Bees HERE. Also check out the Southern Lord EARTH store HERE. Founding guitarist Dylan Carlson has also released his own debut solo LP in the form of the soundtrack, Gold, out now directly by Carlson on LP and digital, with Daymare handling the CD release. 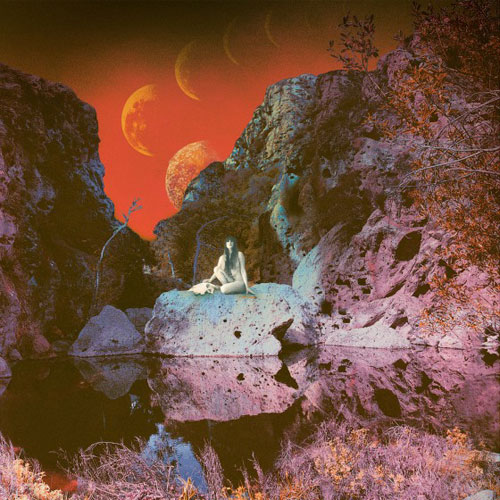 EARTH is amidst their tour through the Southern Pacific, having conquered Japan and New Zealand, and now currently touring through all of Australia. Next month, they’ll return to Europe, after which they’ll begin to tour on the new album to North American audiences and beyond. Stay tuned for continuous updates through the Summer months.

With Primitive And Deadly, EARTH’s tenth studio collection, guitarist Dylan Carlson and long term cohort, drummer Adrienne Davies, manage to pull off the trick of completing an Ouroborean creative cycle, twenty-five years in the making, whilst exploring new directions in their music. For the first time in their diverse second act, they allow themselves to be a rock band, freed of adornment and embellishment. The dialogue between Carlson and Davies remains pivotal, here underpinned by the sympathetic bass of Bill Herzog (Sunn O))), Joel RL Phelps, Jesse Sykes and the Sweet Hereafter) and thickened by additional layers of guitar from Brett Netson (Built To Spill, Caustic Resin) and Jodie Cox (Narrows). Perhaps the largest left turn on Primitive And Deadly, is the prominence of guest vocalists Mark Lanegan and Rabia Shaheen Qazi (Rose Windows) who transform the traditionally free ranging meditations of EARTH into something approaching traditional pop structures.

The foundation of the record was laid in the mystic desert high lands of Joshua Tree, California, where EARTH recorded hour after hour of meditations on each track’s central theme at Rancho de la Luna. Upon returning to Seattle these were edited, arranged and expanded upon at Avast with the help of long-term collaborator Randall Dunn. Thick, dense and overdriven, melodically rich and enveloping, Primitive And Deadly is EARTH reaffirming their position as a singular point in the history of rock.