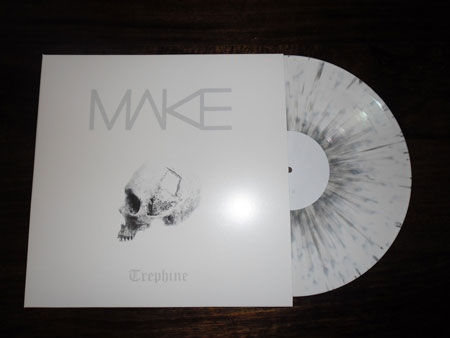 Chapel Hill, North Carolina, drone-pysch-doom-metal trio MAKE are set to release their stunning debut album ‘Trephine’ via Devouter Records on the 30th July 2012 which will be available on a limited Heavy Weight White/Grey Speckled 12” Vinyl.

With themes covering the concept of mortality, the infinity of death and the fragility of life, ‘Trephine’ is an assured debut that firmly stamps MAKE’s mark on the post-metal map.

After the death of a peer, MAKE guitarist Scott Endres (who also played on Horseback’s ‘The Invisible Mountain’ record) took to writing a concept album about a hospital resident regressing into a fantasy state after a psychological breakdown. This fantasy state is represented by a post-apocalyptic world, while the journey the protagonist embarks upon is hopefully the means to an end; his or her own personal trepanning.

With touring plans and festival slots in the pipeline, 2012 looks set to be an incredible year for MAKE as they rapidly establish themselves as one of the best bands to come out of North Carolina in years.