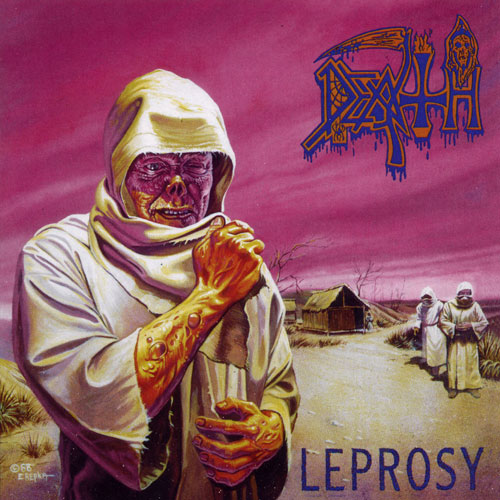 The fifth installment in Relapse’s exhaustive reissue campaign of DEATH’s immensely influential catalog is Leprosy, the band’s titanic second album. Originally released in 1988 Leprosy was a pioneering album, building upon the thrash sounds of Metallica and Slayer but adding a previously unheard level of raw extremity. These songs are the roots of an entire genre: death metal. While this was only the second record DEATH released, it immediately cemented them as heavy metal icons.

Leprosy is set for an April 29th release date in North America, April 28th in the UK/World, and April 25th in Benelux/Germany/Finland. The entire album, as well as the bonus material, has been painstakingly remastered by Alan Douches (Mastodon, Nile, etc) and will be reissued on 2xCD/Limited Edition 3xCD/LP/Picture Disc LP/Limited Edition 2xLP Boxset/Digtal. The Deluxe 2xCD contains 50 minutes of previously unheard and unreleased Leprosy demos and rehearsal material housed in an embossed o-card package with a 24 page booklet featuring unseen pictures of the band as well as brand new liner notes from Ian Christe (Sirius/XM) and Jeremy Wagner (Broken Hope). The LP features the remastered core album on wax together with a download card for all of the music included on the 2xCD.

The remastered version of the death metal classic Pull The Plug can be heard below:

In addition to the 2xCD reissue, a super limited 3xCD version will be available exclusively from www.relapse.com featuring everything included on 2xCD version plus an exclusive 3rd CD featuring over 40 minutes of unreleased live material, housed in a deluxe embossed 8 panel digipak with a 24 page booklet, limited and numbered to 2000 copies. The entire tracklisting is available below.

Finally, a super limited, deluxe vinyl box set (limited to 500 copies) will be available exclusively from www.relapse.com containing: the remastered core Leprosy album on exclusive colored vinyl; a 2nd LP containing unreleased rehearsal material from the Leprosy sessions housed in an exclusive jacket with original flyer art on exclusive colored vinyl; an exact replication of the original Combat newspaper print LP insert, a Leprosy turntable slipmat, and a download card of all 3 discs. Pre-orders including an exclusive new line of official DEATH merch are available HERE, and digital pre-orders are available HERE.