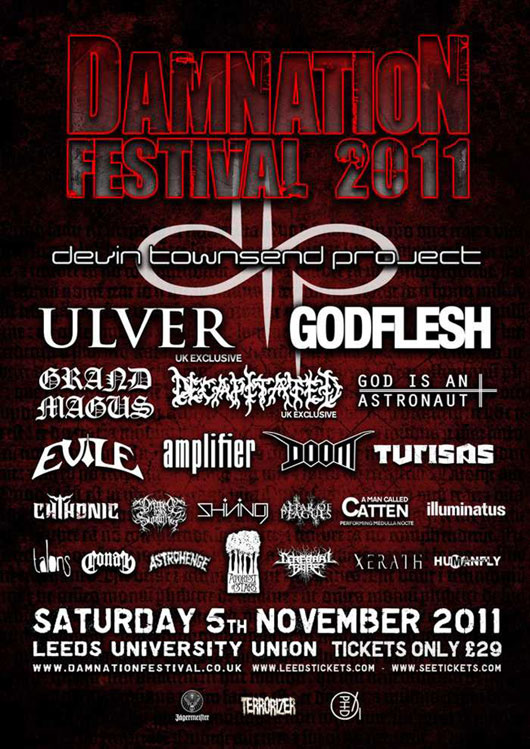 SWEDISH doom titans GRAND MAGUS and a choice selection of the UK underground’s finest music complete the bill for the strongest Damnation Festival to date.

The highly respected Stockholm trio will fly into Leeds to perform on the Jagermeister Stage on Saturday, November 5, alongside the likes of Devin Townsend, Godflesh, Evile and Turisas.

Liverpool’s CONAN add a second dose of doom to the event, while rising Scottish death metal flag bearers CEREBRAL BORE, progressive black metal purveyors A FOREST OF STARS and Leeds’ own wall of noise HUMANFLY beef up the bill.

The jaw-dropping live prospect of classical tinged post rock performed by TALONS and the powerful progressive rock of ILLUMINATUS complete a diverse bill which features 23 bands, across three stages at Leeds University Union on Bonfire Night.

Festival director Gavin McInally welcomed the new additions and appealed to fans to support the event’s seventh installment, or it could mark its final chapter.

He said: “It’s fantastic to be able to round off what we consider to be the best line-up Damnation Festival has ever put together with a highly sought after Grand Magus performance and a pick of the finest underground bands the UK has to offer, across a spectrum of genres.

“With Devin Townsend, Godflesh, exclusive performances by Ulver and Decapitated, not to mention the likes of God Is An Astronaut, Evile, Doom, Amplifier, Chthonic, Turisas and rare and one-off prospects of Dragged Into Sunlight and Paul Catten performing Medulla Nocte, it’s a mystery – to us at least – that £29 tickets haven’t been ripped out of the stores in scenes that would put London to shame.

“In seven years, we’ve never tried to pull the wool over fans’ eyes with regards to ticket sales and this year is no different. The festival will go ahead for certain but if the required support isn’t out there to back this line-up, it’s going to be a struggle, if not impossible to host Damnation Festival 2012.

“I appreciate not everyone has a spare £29 in their bank account, Leeds can be a trek for some people or simply the line-up isn’t doing it for all fans but if even a fraction of those who have vowed to buy tickets or claimed they’d crawl through broken glass to Leeds if any of their favourite aforementioned acts were confirmed, actually did follow through and buy a ticket, we’d be planning a fourth stage by this point.”

“However, we hope that with the line-up now complete, the summer festival season now over and the prospect of one last metal shindig before the miserable winter sets in, fans will continue to show the unbelievable support we’ve received in the past seven years and make this year another resounding success.”

Listen to ‘Bond of Blood’ taken from Grand Magus fifth album ‘Hammer Of The North’ below.