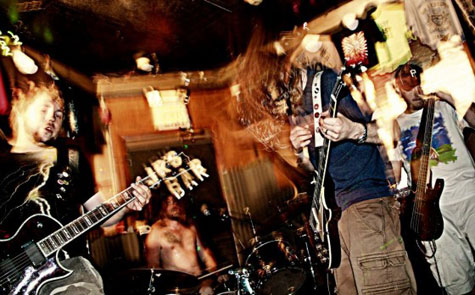 As Jersey riffsmiths CLAMFIGHT prepare for their second full-length I Versus The Glacier to be officially released in less than two weeks, today The Obelisk has posted a massive track-by-track breakdown of the new album in honor of the webzine’s label The Maple Forum having begun shipping preorders of the disc. Check out the action HERE.

CLAMFIGHT has also just shelled out info on a few new Spring live gigs. Next week the squad will drop a deuce of shows, hitting New London, Connecticut on Friday the 18th and Rochester, New York the next evening. But CLAMFIGHT is now confirmed to take part in the bruising, all-day second installment of the now annual Eye Of The Stoned Goat gathering, set to smoke-out New Castle, Deleware on February 9th alongside Iron Man, Pale Divine, Beelzefuzz, Wasted Theory and a slew of others. Late in March they’ll head down to Frederick, Maryland set to kick it live with Beelzefuzz, War Injun, Ichabod and Hollow Leg.

CLAMFIGHT just posted some gnarly new live footage (below), and if you missed it, can hear their track “Sandriders” streaming at Stereokiller.