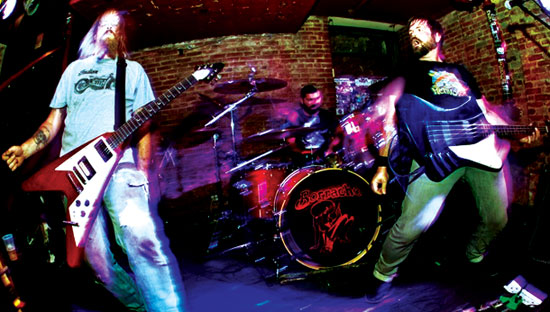 Monumental stoner riffers BORRACHO today announce the release of a new split 7″ single with the band’s old friends and fellow fuzz-aholics CORTEZ, to be released on Japan’s AM Records in April. The record will feature a brand new BORRACHO original “Know My Name” and new CORTEZ ripper “Vanishing Point.” The limited edition of 500 copies will be available on black, green and purple vinyl, with original artwork by DC artist Matt Corrado, and is now available for streaming and pre-order on BORRACHO‘s Bandcamp page HERE.

The connection is a long time in the making. BORRACHO played their first live show with CORTEZ back in 2008 at the now-defunct DC venue The Red and The Black, and the bands have shared stages up and down the east coast in the years since. BORRACHO guitarist/vocalist Steve Fisher said “We couldn’t have planned a more appropriate matchup. We go way back with the CORTEZ guys, and have had a lot of laughs.” He continued, joking “As long as (Cortez drummer) Jeremy doesn’t suffer a severe injury during the pressing of this record, we’re going to throw down with these guys again in April.” 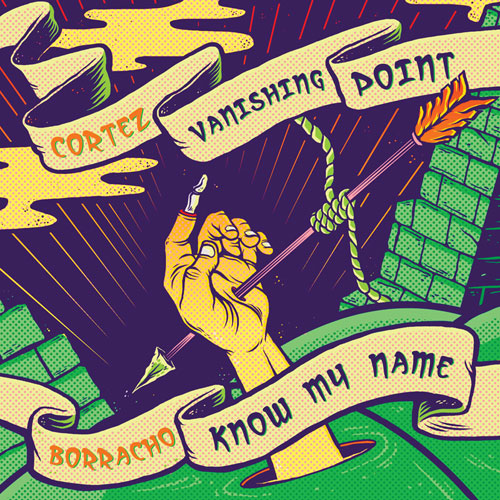 BORRACHO will be kicking off a schedule of winter and spring dates in the eastern US this Saturday in York, PA with Black Cowgirl, Crobot, and Clamfight. The trek will include some familiar stops as well as the band’s first visits to Tennessee and Ohio, playing with like-minded riff worshipers and friends along the way.

The run will be capped off with a send off show in their hometown of Washington, DC, which will also mark the release of the BORRACHO/CORTEZ split 7″ in celebratory fashion. CORTEZ and Ohio’s Valley of the Sun will assure that show delivers the goods to the DC faithful and properly sends off the DC boys on their first European tour. More on that soon…