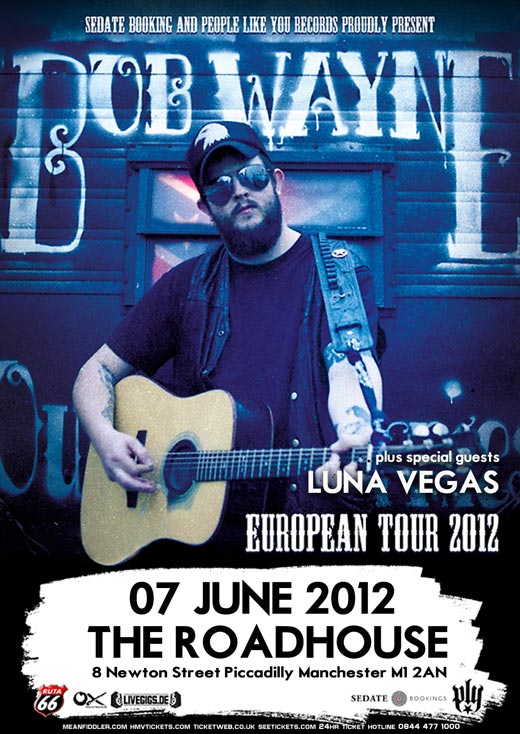 Future Noise and The Sleeping Shaman are very excited to be supporting this show for the excellent BOB WAYNE & THE OUTLAW CARNIES at The Roadhouse in Manchester on the 7th June, that’s This Thursday!! ….So if you like your country outlaw style (Johnny Cash, Hank 3) get yourself down to The Roadhouse for a rebel rousing night, support comes in the shape of Luna Vegas – Psychobilly Mayhem (Ex-Stench).

Tickets are £9 and are available from www.ticketweb.co.uk.

If you have an hour and 1/2 to kill, here’s a video of what to expect of a full show by BOB WAYNE & THE OUTLAW CARNIES which was filmed earlier this year in Nashville, Tennessee.

BOB WAYNE Biography
One can always best gauge success by the number of people their music touches and has a positive impact on, not by the sheer amount of units sold. This has never been more evident than in the case of the immensely talented singer/songwriter/performer and dynamic storyteller BOB WAYNE, who has just inked a worldwide deal with People Like You Records. Best known for his leather vest, bandana and revolving crew of banjo players, fiddle players and upright bassists, BOB WAYNE carries the torch for the outlaw country tradition with a modern punk snarl. His fan base runs the gamut and his music offers something for everyone and always starts a party.

Bob’s debut label offering “Outlaw Carnie” forsakes none of the gritty truth of his three prior releases, even if this one isn’t slapped on a burned CD-R and sold in a plastic sandwich bag out of the trunk of his Cadillac limousine.

Doing his best to abide by the traditions of Johnny Cash, Waylon Jennings and Hank Williams Sr. and Jr., the forerunners of his friend (and patron-of-sorts) Hank III, BOB WAYNE adds his own spin to the echoes of the past as well. He walks, talks and breathes the road warrior lifestyle.

“With this new album for People Like You, we really took our time,” Bob says proudly of his first worldwide release. “We took some of the songs I wasn’t happy with and re-recorded them with a full band, mixed them and added new instrumentation. I’ve sang some of these songs over the last four years, so the songs have changed. Sometimes the songs morph, I sing them with more character. This record has some songs you haven’t heard and songs I’ve changed completely.”

Outlaw Carnie also boasts an impressive list of buddies and session players, including Nashville-based upright bass player David Roe (who played with Johnny Cash for many years), fiddle player Billy Contreras (who has played fiddle for George Jones) and Bob’s old friends Andy Gibson (who plays with Hank III) and Donnie Harran (Bob Dylan, BR549). Bob states, “Donnie and Andy have been on all of my CDs, they’re amazing musicians”.