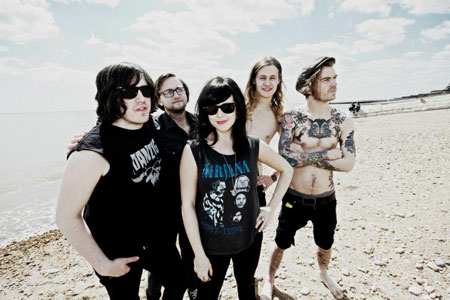 Too Pure are delighted to present the first brand new offerings from Leeds’ stoner rock beasts, BLACK MOTH, since the enormous success of their debut album in May 2012. “The Killing Jar,” was released on New Heavy Sounds and produced by Jim Sclavunos (Nick Cave and the Bad Seeds, Grinderman). A dramatic statement of intent. and a smart, savvy, exhilarating kick in the face. It rocked like a bastard, gaining the band rave reviews from the likes of Kerrang, Metal Hammer, Rock A Rolla, The Quietus, Artrocker and BBC6 Radio. Since its May 2012 release, the band have enjoyed some thrilling gigs on the festival circuit including Reading and Leeds Festivals, and a thrilling 15-date UK Tour with fellow riff masters Turbowolf.

These two explosive tracks provide a taste of what to expect from their eagerly anticipated second album, which they will record later on this Summer after a European tour and some more festival onslaughts. “Savage Dancer” is a sinister, stomping hymn with an almost worryingly addictive chorus. In contrast, “Tree Of Woe” creeps slowly upon the listener with Bevan’s stoner drawl insidiously weaving through the sprawling roots of heavy riffage.

Both tracks evoke crises of faith and life-threatening cultic obsessions… and if those guitar solos don’t make you a believer, nothing will! The 7″ single will be limited and hand numbered to 500 copies on white vinyl as part of the Too Pure Singles Club and is set for release on 29th April 2013.