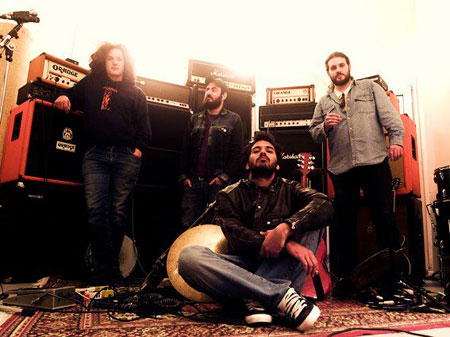 DESERTFEST are thrilled to welcome the first Greek band at DESERTFEST BERLIN : the striking 1000 MODS!!

1000 MODS is a 4-piece psychedelic/stoner rock band from Chiliomodi, Greece, formed in 2006. They play an impressive and highly addictive piece of downtuned, fuzzed up and hard hitting stoner rock, hone in a serious groove.

In the beginning of 2007, they released their first (self-financed) EP “Blank Reality”, and in December 2009 they stroke back with a brand new 7” EP titled “Liquid Sleep”, on the Greek label CTS Prods. In may 2010, they released a split tape with the German psy-doomsters Wight, and few months later, they recorded their full-length debut album “Super Van Vacation”, produced by the almighty Billy Anderson, and released by German label Kozmic Artifactz (vinyl) and CTS Prods (Digipack) in September 2011. Last December, the band released their latest EP “Valley of Sand” on Lab Records.

Since their beginning, they have played over 100 live shows, including openings for Brant Bjork, Colour Haze, Karma to Burn, My Sleepin Karma, Radio Moscow and many others. In October 2011, they toured in Europe playing 25 gigs in 12 countries, with an appearance as special guests at Up In Smoke 3, and in August 2012, they played at Aquamaria Festival.

This year, it’s time for them to play at DESERTFEST BERLIN ! “Super Van Vacation” vinyl re-issue is scheduled in April 2013 by CTS Prods, just in time for the festival, so get in the van, and come to Berlin!!