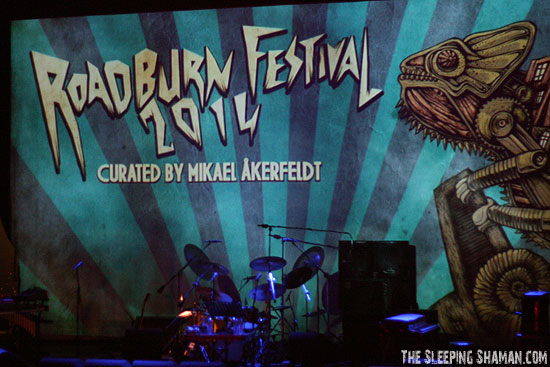 As the second day of Roadburn dawned, several thousand musical nomads arose to the scent of prog rock and a worn liver. Mikael Åkerfeldt was a choice for the post of curator that I for one would never have guessed, but it made total sense, and the bands he’d booked for this Friday were testament to the wisdom of having Opeth’s leading member at the tiller for day two. He booked a lot of prog – you never know what you’re going to get with this genre, as it’s very easy to veer into pretentious farce and boredom. But then if you book the likes of MAGMA it’s another story altogether; I can honestly say the ninety minutes France’s finest prog band regaled us with on that day was an absolute pinnacle of my concert-going life. To see even one of the eight (if my memory serves me right…) musicians that make up Magma’s current lineup play for hours on end would have been worth the money, but together… Well, you thought Magma were good on record? Believe you me, their live shows are as spellbinding as their reputation dictates! They played three extended numbers that transcended any kind of categorization; jazz, funk, rock, surreal comedy, kletzmer… Hell it sounded like all and none of them, but unmistakably MAGMA – Christian Vander has more talent in his little finger than most musicians can summon in a lifetime, and although all the players in Magma are brilliant, his performance was (of course) the crowning highlight. I could watch him play drums forever and not get bored, punctuated by his loony Kobaïan scat passages, with the voice treated as much as an instrument as anything made of metal and wood (Vander’s wife and her singing cohort were also standout sonic jewels among the gold). It is no secret that I’m a Zappa devotee, and the crazy spirit of Vander is about as close as we’ll get to Frank’s late Sixties and Seventies heyday; Magma’s extensive use of the xylophone brought back memories of being captivated by Ruth Underwood on “The Dub Room Special” all those years ago… Percussive nirvana! Over the years, Roadburn may have booked the great and the good of the world of heavy music, but the chances are they will never get the chance to book musicians on the level of Magma again – they are simply on another level, and are as bold, daring and idiosyncratic today as they were when they first started. 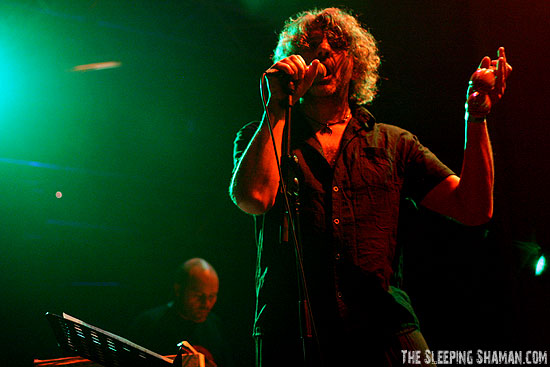 The polyrhythmic Mahavishnu Orchestra vibes continued (courtesy of Åkerfeldt’s discerning ear) with Änglagård. Apparently they’ve been around since the early Nineties, but this was the first I’d heard of them. I was truly captivated by their mad “impossible-to-dance” instrumental insanity, veering between atonality and gorgeous melody. Keyboards, flute, saxophone, virtuoso guitar and a quirky sense of fun (as essential an ingredient to good prog as for psychedelia) made this Swedish delight my discovery of this year’s Roadburn. No gimmicks, no daft costumes – just FUN, which is not a word that I’d choose to describe the masterful Comus! Roger Wootton’s brand of weirdness still sounds like nothing else; creepy, pagan and claustrophobic are words seldom heard when referring to folk, but Comus are all these things. “Song to Comus” was my (predictable) highlight, and listening to them play was like being transported to an English woodland, with the sense of paranoia and dread that permeates “Blood on Satan’s Claw” drenching the atmosphere of the 013. 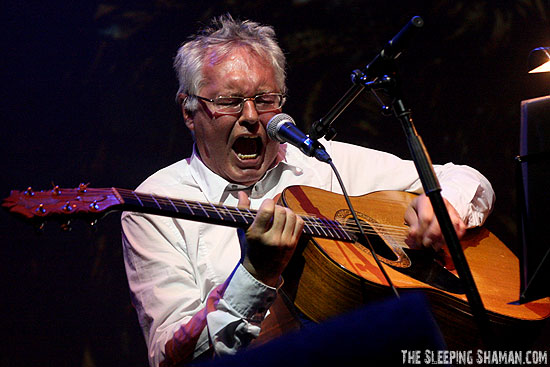 Sadly, I cannot be so complimentary about another legendary band playing the festival: Goblin, or rather “Claudio Simonetti’s Goblin” were as much of a disappointment as I feared they would be. This is actually the third time I’ve seen Goblin, and the first time I saw them was actually closer to the original lineup than the travesty parading itself to people these days – the only original member missing was Simonetti, and it was AMAZING. I subsequently saw them in Glasgow a few years later, and it was awful – essentially, it was Simonetti’s lackluster heavy metal band (Daemonia) with a few members of Goblin tacked on. In fact, if there is anything positive to be said about Goblin’s Roadburn’s performance, it’s that it wasn’t as depressing as that night in Scotland… However, try as I might, there were too many deviations from the source material to make their Tilburg performance tolerable, and not only was the jazziness of the original records nigh on nonexistent, but Massimo Morante’s gorgeous guitar playing was no longer there! Simonetti has written some of my favourite music of all time, and for that I am grateful, but it seems decidedly cruel to boot someone of Morante’s talent out of a band that so clearly benefited from great guitar playing. 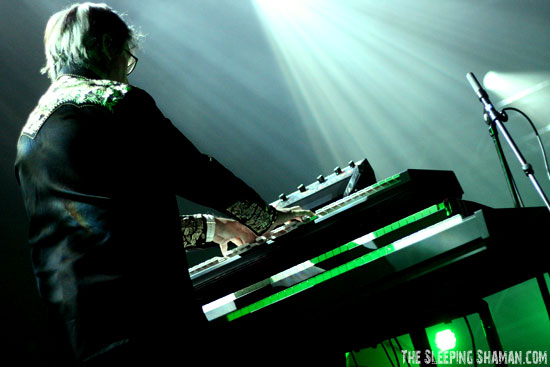 The positive side of this disappointment was that I was able to go see Procession play some PROPER ‘eavy metal! Felipe’s vocals are as commanding as on record, and the riffs as empowering as the hammer of Crom itself! “To Reap Heavens Apart” was the high point, although I must admit that was the last song of theirs I caught, as their bass player suffered amp trouble and stormed off, leaving the rest of the band to gallantly try to hold the fort without him. I chose to leave with the great memory of the last song I heard fresh in my head, and with the hope to see them play in the UK soon, after all, they’re clearly in their prime and are not going to let up any time soon! 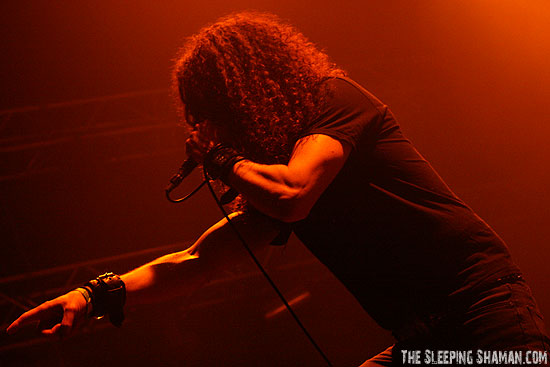 Talking of proper heavy metal, Candlemass played one of my favourite records of all time in it’s entirety – I don’t think it’s necessary for me to elaborate on how great “Ancient Dreams” is, so I won’t! It’s my favourite Candlemass album, but as amazing as the riffs and solos are, it will always be MESSIAH’s album, and I had serious misgivings about seeing it performed without his participation. Call me a grumpy old fart, but the vocalist they currently have wasn’t even doing a credible impression of Messiah, nor was he doing enough to make the songs his own. Mind you, I must confess I barely lasted through “Mirror Mirror” before leaving in disgust. Call me a cantankerous dinosaur, but that was my honest opinion. 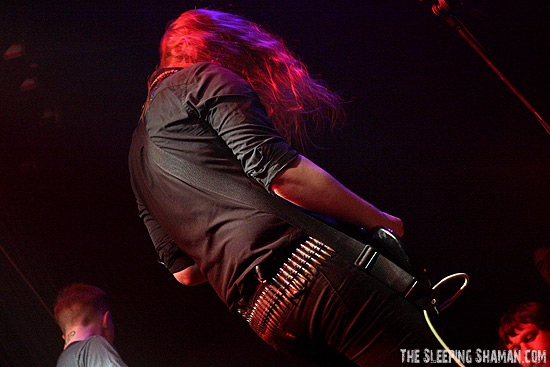 Mind you, it guaranteed me a place at the front of a packed green room to see the best death metal band of recent years. Obliteration should have written on their passports as their job description: “tearing new arseholes”. This was the third time I’d seen them, and they only seem to get better and better. “Black Death Horizon” was a sublime achievement of punked-up metal of death (with a bit of black metal thrown in – hey, they are Norwegian after all!). Vocalist and guitarist Sindre Solem is one of the best frontmen around, although I’m going to totally destroy his street cred by stating that he’s actually dead nice offstage – don’t let those middle fingers fool you! Anyway, digressions aside, their performance was fucking brilliant! The Roadburn festival needs a solid dose of SPEED to keep grumpy cunts like me happy (take heed, Napalm Death!), and it was great to be able to bang my head faster than 2bpm. “Goat Skull Crown” was my favourite track off last year’s monsterpiece, and that was especially gratifying played live. The sound was bloody perfect too. Perfect drums, blown-out/insane vocals, mad solos and creepy riffs; this is about as good as death metal gets. 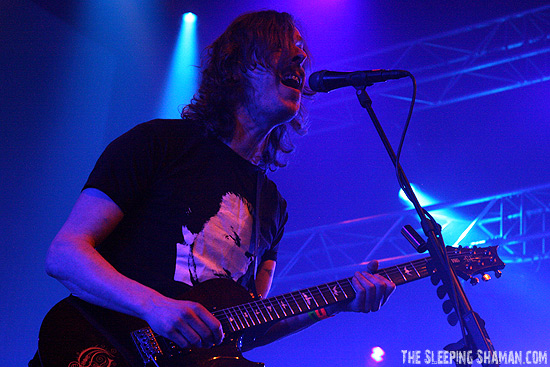 The sheer, aggressive brilliance of Obliteration rather muted the grandeur of Opeth, who I’ve yet to see play a bad show! It had been a few years since I’d seen Opeth, and to a degree I was reliving my youth and gaining a newfound appreciation for their new drummer (I was a HUGE fan of Martin Lopez’s playing) and of their last album (i.e. the one where they went full-on prog). However, it would be disingenuous of me not to state that the high point for me as unquestionably “White Cluster”, one of the best songs off “Still Life” (which I still reckon is their best). “Ghost of Perdition” was another highlight, and although I was hoping for “The Leper Affinity”, the title track of “Blackwater Park” was a perfectly acceptable compromise. Åkerfeldt’s only real pitfall was booking a whole bunch of bands that upstaged him (thank you!), and in case you haven’t quite got the picture: GO SEE MAGMA. 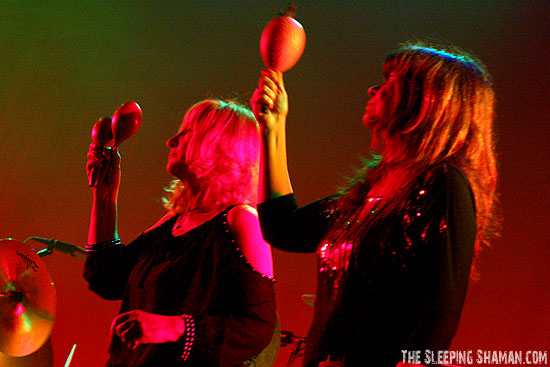 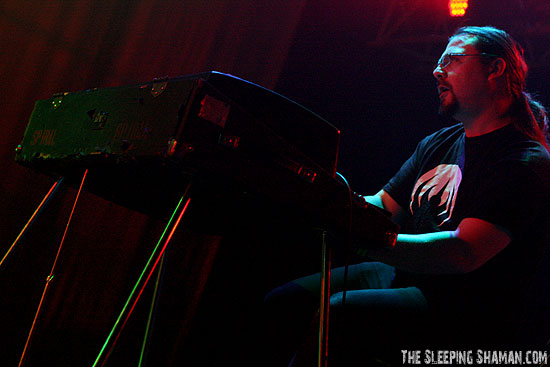 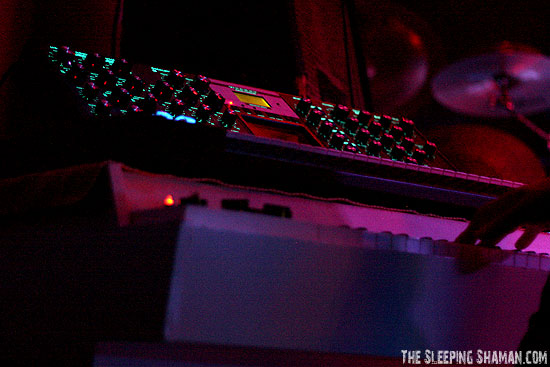 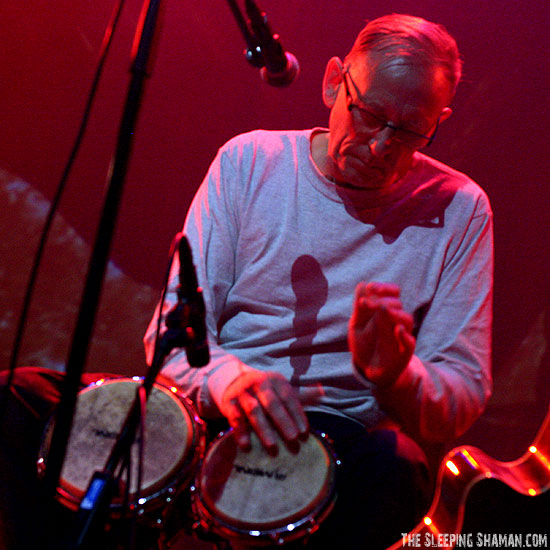 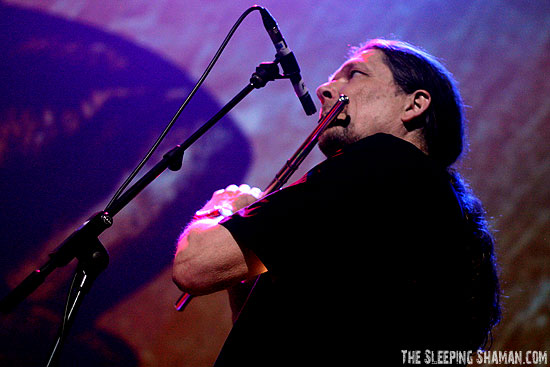 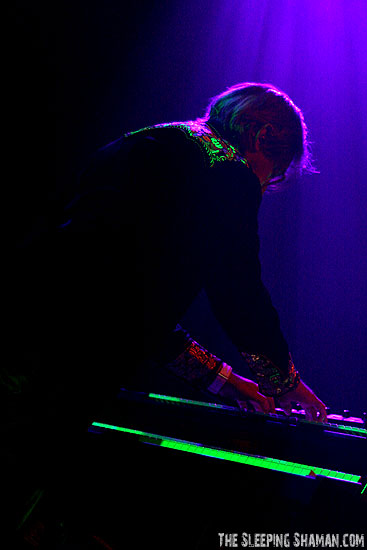 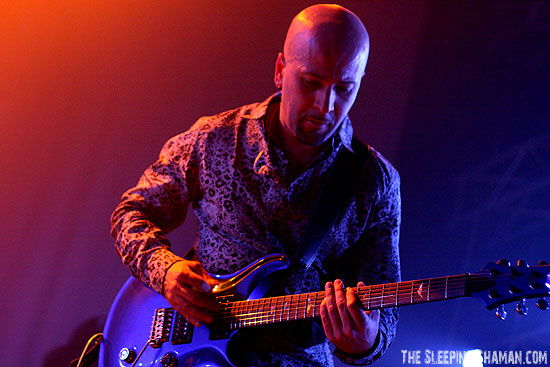 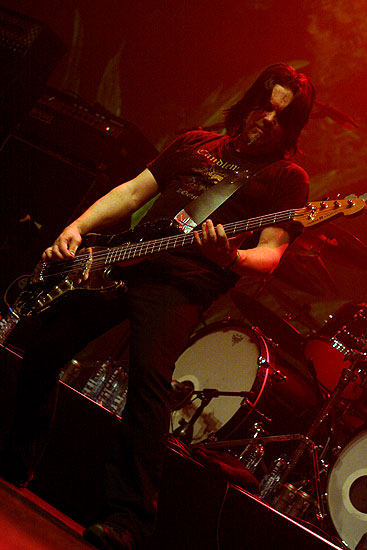 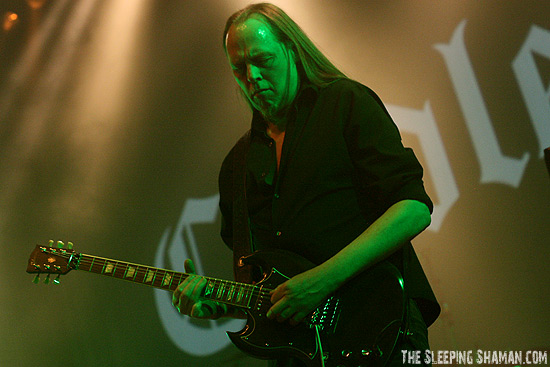 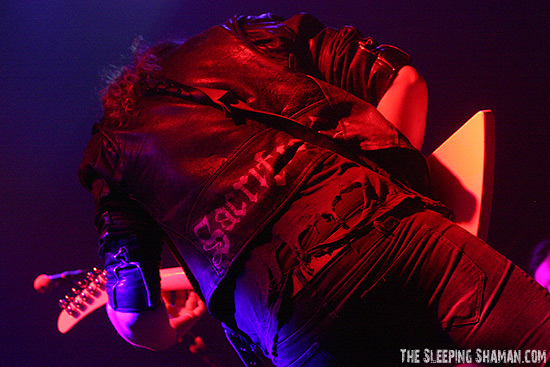 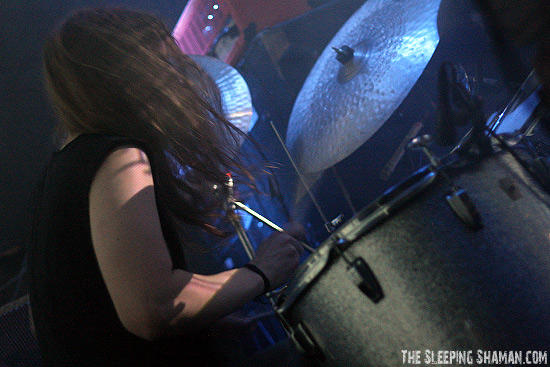 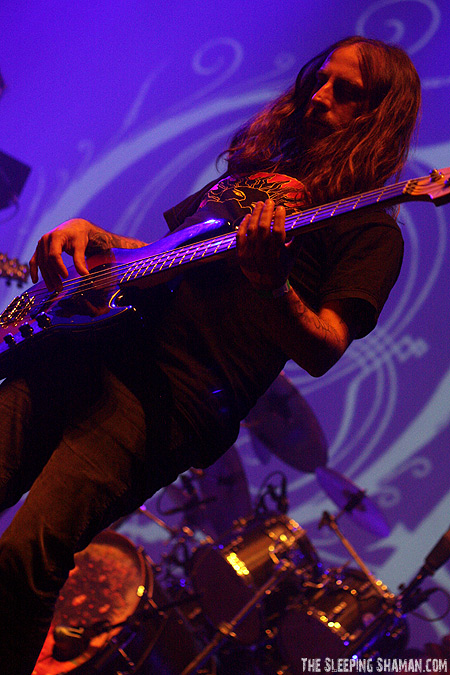 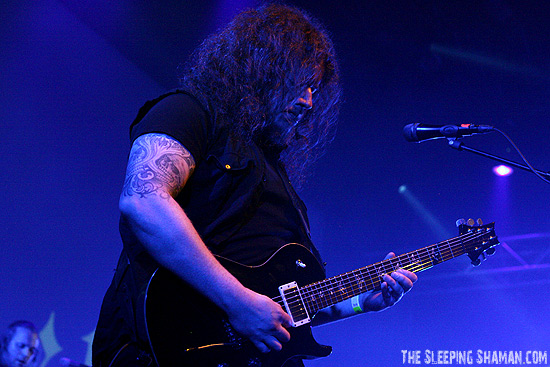 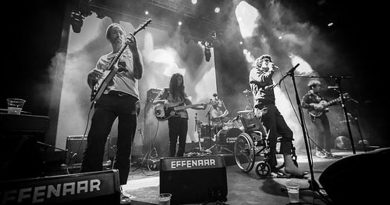 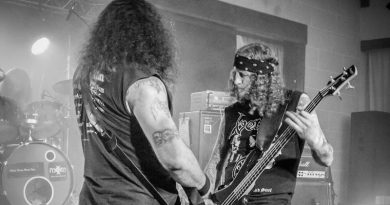 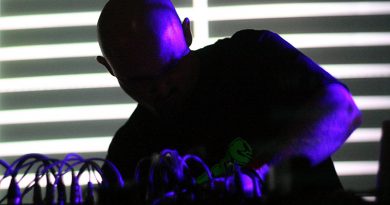