Wakefield’s warriors of heavy metal Iron Void are primed and ready to take us all down with the recent release of their sublime and none-more-doomladen debut self-titled record (review). Not only that, but they’re about to hit the road with the mighty Goatess this week to bring even more gloom, misery and riffs to a town near you. Pete Green sat down with sole founding member, bassist/vocalist Jonathan ‘Sealey’ Seale to talk doom, pies, voids and a bit more doom… 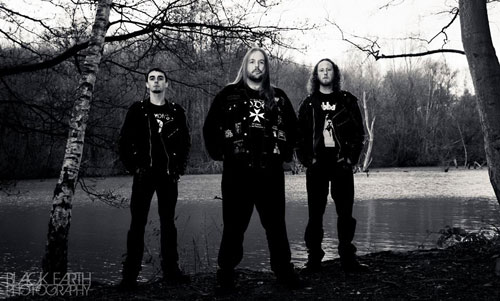 Sealey! How the devil do you do, sir? Great to have you chatting with us Shamanites today mate. How are things in the Iron Void camp?

Hi Pete, I’m very good thanks! I just returned home from a trip to the Malta Doom Metal Festival, which was awesome and featured some fantastic bands including Manilla Road, Desolation Angels, Forsaken, Victims of Creation and Arkham Witch to name a few. Things are pretty good at the moment for Iron Void, we’ve had some great reviews for the new album and we’re really looking forward to our upcoming UK tour with Goatess.

Some people have no idea who Iron Void are. Those people are foolish, but let’s give ‘em a chance eh? Can you give us a brief band history? Who plays what and when and how?

Iron Void was originally formed by myself and Andy Whittaker (current Solstice guitarist, ex-The Lamp of Thoth) way back in November 1998 in order to create an old-school Doom Metal band. The original line-up split after a couple of years (1998 – 2000). Following this, I played in several bands over the next seven years or so, including Tomb (featuring Jamie ‘Boggy’ Sykes of Burning Witch / Thorr’s Hammer), Black Maria (Sludge), Sermon Of Hypocrisy (Black Metal) and Scion (Death / Thrash Metal). I wanted to improve my playing and I was into Death Metal since I was a teenager.

However, my heart lies in Doom Metal and I longed to play this style again. I joined Steve’s band, So Mortal Be, in 2007 on bass initially. The line-up was unstable for a while but when Diz (original Iron Void drummer) joined on drums we started to play some old Iron Void songs again as well as a couple So Mortal Be ones and we just agreed to change the name to Iron Void. We released our first official demo in October 2008, entitled ‘Live 2008′. This was followed in 2010 by the EP, ‘Spell Of Ruin’, released on Steve’s (current IV Guitar/ Vocals) label, Doomanoid Records. This was re-released in 2012 with two bonus tracks via Doomanoid once again and Barbarian Wrath recently released our self-titled debut full-length.

You’re just about to hit the road with Chritus and those doomy Swedes Goatess for a five-day UK binge of heaviness and misery. What are you looking forward to most about the upcoming tour? What can we expect when Goatess and Iron Void roll into town?

You can expect an evening of heavy Doom Metal played at ear bleeding volume! I’m really looking forward to hanging out with the Goatess guys, playing some great music and meeting friends old and new. It’s going to be a tour to remember, that’s for sure! I’ve known Chritus for a few years now; he’s a one of a kind and a legend of the scene in my eyes. 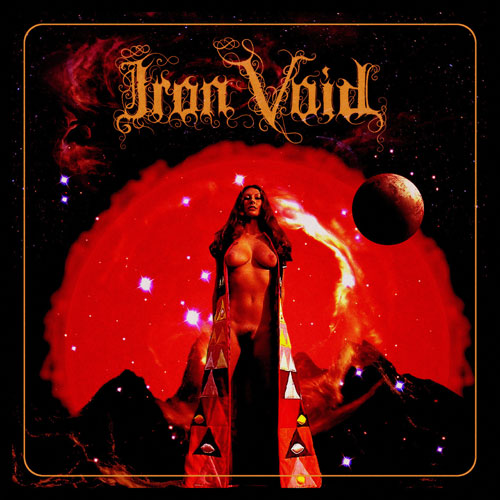 Your first full-length ‘Iron Void’ has just been released on Barbarian Wrath and it sounds bloody awesome. That said, it’s very much a straight-up doom album. Why do you think people should listen to Iron Void when there’s so much doom out there on the scene right now?

I think Iron Void are as you say, a straight-up Doom band who wear our influences on our sleeves. We’re proud of the style we play and we mean it one hundred percent. Doom has experienced increased and renewed interest in recent times but I do feel Iron Void are somewhat unique in a way.  Admittedly, we do have strong influences from bands such as Saint Vitus, Black Sabbath, Pentagram, Candlemass, Count Raven, Sleep, early Electric Wizard, etc. but we also draw from bands like Thin Lizzy, Iron Maiden, Judas Priest, Venom, Motorhead and Jimi Hendrix to name a few. We try to write songs which are heavy, but catchy at the same time.

You guys are from Wakefield – home of pies, mild, rugby league and not a lot else probably (that’s practically a compliment from a man born in Coventry…) Has your home town had an effect on your music at all do you think over the years?

Well, to be honest, yes, we are based in Wakefield and although I do enjoy a pint of mild and the odd pie every now and then, I’m actually from Birmingham originally. So, yes, my home city has definitely had an effect on my musical output. I thought Ozzy was from the States when I was a kid and had no idea he was from the same city as myself. I’m immensely proud of my Brummie heritage – Black Sabbath and Judas Priest invented Heavy Metal, it cannot be denied!

Do you have any new material in the riff bank for upcoming future releases or is it all systems go with the ‘Iron Void’ material?

We’re obviously going to be drawing heavily from the self-titled album for our live sets during our upcoming tour but we have been rehearsing and writing old and new material for our second album. We’re recording this at Skyhammer Studios with Chris Fielding at the helm in March 2015. The album will be entitled ‘Doomsday’. We’re also writing material for our third album which will be a concept album based on the Arthurian legends, entitled ‘Excalibur’. We definitely have a long term plan!

What are your favourite venues around the UK?

Some of my favourites include Bannerman’s Bar (Edinburgh), The Snooty Fox (Wakefield), The Asylum (Birmingham) and I used to really like Bradford Rios back in the day and The Empress, Bradford (RIP).

How do you write songs? Do you write as a group or is it a total Dave Mustaine-esque dictatorship with yourself at the helm?

Ha, ha! Not quite! Me and Steve usually come up with our own ideas for songs and bring riffs to rehearsal to jam on and improve. We have both come up with complete songs in terms of riffs and arrangements. Lyrics usually follow once we have the basic musical idea for the song. However, we’re now trying to bring riffs to rehearsal and jam ideas more as a band than we used to. We both write lyrics and sing and I’d like to mix and combine the vocals at bit more in future. 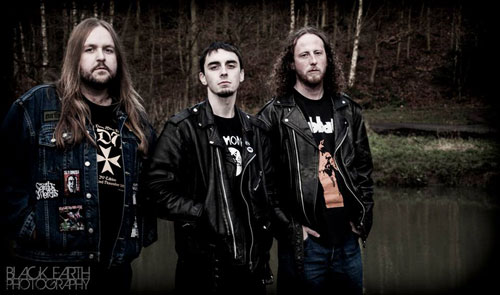 Who are your favourite bands? Where does the spirit of the mighty ‘Void come from?

Sabbath aside, (‘cos y’know… it’s Sabbath) who are the greatest doom band of all time, in your opinion?

Saint Vitus or Pentagram in my opinion, it’s a tough choice between the two!

I’m really digging ‘Own Worst Enemy’ off the album – it’s got a really cool truckin’ style vibe and feels really different to the other slower tracks on there. Was there a conscious decision to put this one in the middle of the order to up the ante and emphasise the gloominess on the other tracks?

Good to hear! ‘Own Worst Enemy’ reminds me of Motörhead and Venom. The running order of the tracks on the album was intentional, the first three tracks are hard hitters and catchy, then it slows down and picks up again before we close the heaviness with an almost acoustic piece to bring you down to earth at the end.

What are your favourite topics to write songs about? Barbie dolls? Poodles? Nuclear war?

None of your suggested subjects, unfortunately! We write our lyrics based on various subjects. The main traits are a search for the truth, occultism, folklore, hammer horror films, human emotions and mythological subjects.

Which other bands/records are you listening to at the moment? Who else should we all be checking out?

Picture the scene: You’re due to play a huge show but the other guys in band literally fall into an Iron Void. Like, literally, a big old void. Who do you call in to replace each band member at the last minute given open choices of any other musicians on the planet?

Ha, ha! This is a great question! I would ask Wino to sing and play guitar and ask Joe Hasselvander to play drums!

What do you do when you’re not dooming? What else keeps your days busy?

I own and run a publishing company as my day job. I like to spend time with my girlfriend, read and learn about ancient myths and legends in my free time, as well as listening to all manners of music.

Thanks so much for taking the time to respond to my drivel Sealey and best of luck with the tour and everything in 2014 and beyond! Is there anything further you’d like to add or share? Forthcoming plans perhaps?

Thanks for the interview Pete!  We have a UK tour coming up in November with Goatess (dates & flyer below), beyond this, we will be recording our second album in March next year with UK and European dates to be announced for 2015. 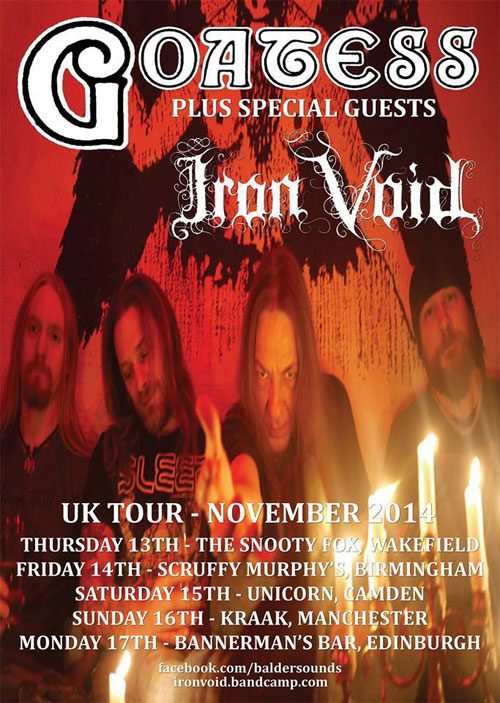 Iron Void is out now on Barbarian Wrath Records. 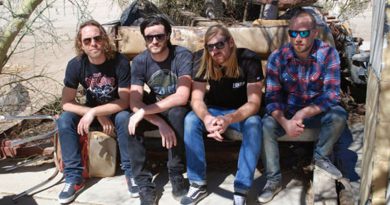 Dead In The Woods Interview 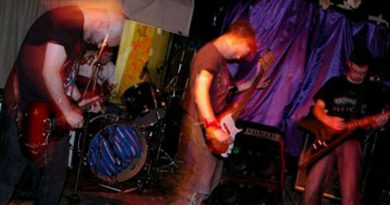