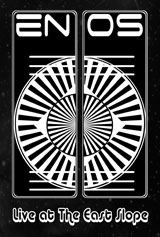 It’s a brave move for a band to be releasing a live DVD when on a budget. Fortunately Enos are a brave band. Often thrown in with the melee of stoner rock bands Enos seem to come from an altogether different mindset as they blend 70’s style, bluesy hard rock riffing with a textural, trippy, Pink Floyd inspired love of prog and pyschedelia that sets them apart from many of their contemporaries. For that reason alone they are worthy of investigation.

As is the nature of live DVDs, however, the chances are you won’t be checking this out if you aren’t already familiar with the band…they are very much a fan’s treat as opposed to an introduction for the uninitiated. So, with that in mind, how have Enos succeeded in presenting themselves in a medium that is potentially fraught with issues. Very well it has to be said. Obviously this is no Kiss style, multi camera shoot in high definition video but the band and film crew seemed aware of their limitations from the outset and work well within them. The band have a number of cameras that focus on the action, and with this being a fairly small room, it means that many of the shots are up close and personal giving an intimate view of each member as they run through an hour long set that culls from their full length debut All Too Human and their Chapter One EP.

The quality isn’t crisp HD but when combined with the impressive and very trippy light show the band were employing on the night, it only seems to add to the atmosphere rather than detract from it. The band aren’t the most animated on stage, aside from drummer Sparky Rogers’ occasionally scary “drum faces”, the guys are very much heads down and immersed in the sounds they’re creating yet the camera work does add a sense of motion as it moves around the band and cuts from member to member, interspersed with occasional images of rockets, space, chimps…etc.

Getting a decent sound recording from in intimate gig isn’t always an easy task but Enos here have succeeded in obtaining a sound that is well balanced allowing each instrument space in the mix whilst retaining that live vibe.

This is clearly a work of love for the band and for Rapture Films who produced this with the band and benefits from the time and effort that has been put into it rather than just sticking a hastily shot performance up on YouTube. In many ways watching this DVD will give the viewer a more inclusive and immersive experience of the band than simply listening to their recorded output as it successfully portrays the overall concept of the band rather than one dimension of it on record.

Enos have taken a leap of faith in producing this live DVD and pulled it off, maybe you should take a similar leap of faith and introduce yourself to a truly worthy band.