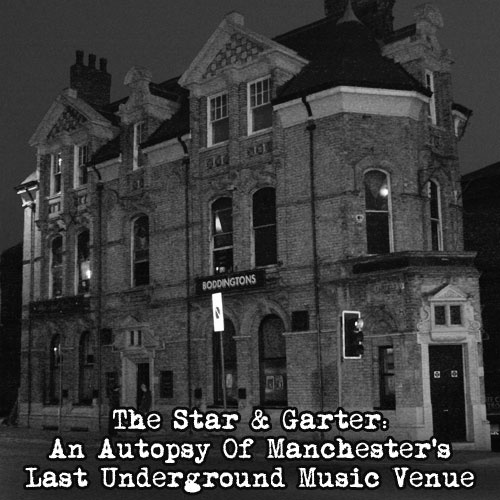 When you walk under the bridge and reach the back of Piccadilly station there isn’t much on the streets behind it but gray dilapidation; an area of Manchester that most can’t recall; it’s only frequent dwellers being the prostitutes that prowl its various indents, and a handful of half crazy drunks that find the dark route tolerable in their night time exploits. It’s a bleak area of run down properties obscured in shabby anonymity from which the eyes naturally avert, as you gravitate towards the bright centre. The area would in fact have no frame of reference at all if it wasn’t for one building, described irrefutable and in my own undeniable words as a “premier shit-hole venue,” the place is most certainly a dive, but that in no way detracts from its worth, or my fondness for it. In any sober hour it’s a decrepit tomb, with all the same appeal as the dregs of cans stuffed with roach and ash the morning after. These traits are imperative to the character of The Star & Garter, and its supremacy as a music venue of an entirely doomed breed, with its death in each direction.

The venue suffers from a catch 22 of ailments, with the sqaulitude of the area being one, and the nature of its transformation causing it certain demise.

Only a stone’s throw from Piccadilly station it might seem odd that just under the bridge next to the back of Piccadilly – an unpleasantly busy hive of public extortion – the property surrounding has been left over time to decay, with a seeming lack of investment and interest, as though no one’s noticed its potential to become a part of the city that exists only 2 minutes away on foot. 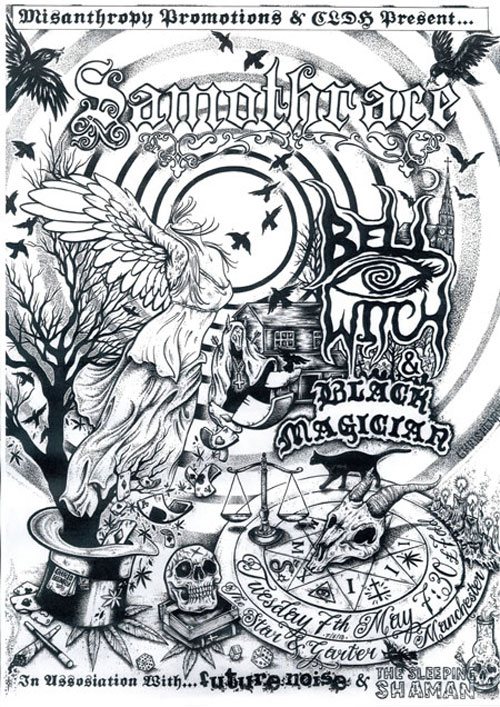 I spoke to Andy Martin at the gig on Halloween (Ten Foot Wizard/Bong Cauldron/Pist/Barbarian Hermit/Callus) who was evidently tired of going through the situation, but obliged politely and cleared up a few things that the MEN didn’t put into writing.

It was a morbid and angry thing to be finally talking through the grave etchings of a venue that’s always had an air of impending doom; riddled with rumours of closure. The most recent of which I heard, was of being bought out by the Warehouse Project as a permanent fixture for them to sell overpriced water to people in desperate fear of overheating.

In 2016, building will commence for two new platforms, closing the road for three years of construction; the venue doesn’t have to actually close its doors for this time, but as an obvious point that Martin reiterates, the area generates no passing trade and the venue relies on bands being able to use the road for their vans, “Once the roads closed people will just go somewhere else; we’d be closed within months”.

There’s a resignation with Martin’s demeanour that’s understandable as you get a grasp of what’s happening. The plans made by Network Rail for the two new platforms have been in the pipeline for 4 years and are of no shock; they are however somewhat separated from the ugliness in the circumstances around the way in which the venues going to end its existence.

The property surrounding The Star & Garter isn’t the forgotten, void of purpose collection of dirt and rubbish that it seems. Martin told me that most of the land surrounding The Star & Garter is owned by London and Continental Rail: A government run company that “manages and develops property assets and liabilities within a railway context.”  The purpose of this company is to buy up property earmarked for railway development, and apparently the areas surrounding it, as potential for future demolition/sale. In the case of Fairfield Street, the company has ensured the continued degradation and low worth of the property in the area, forcing the sale of The Star & Garter at a marginal price, to sell further down the line as prime real estate once the work is finished. 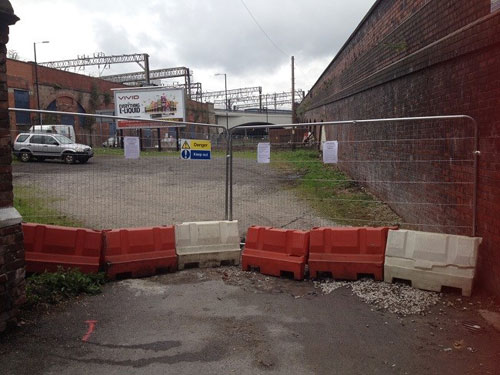 The difficulties that The Star & Garter has had with staying afloat in competition with the likes of the Northern Quarter, is something that has threatened the venues existence for years now; but this apparent bad fortune is in fact a direct consequence of London and Continental Rail for letting the area decay in isolation for a bigger contrast in worth at the end game. The Star & Garter has survived as an iconic venue steeped in history despite its lonely existence from Manchester’s central commerce, winning custom back to their Punk and Morrissey nights despite Northern Quarter clubs attempting to poach them with their own renditions, also, it has been the obvious choice for most doom gigs over the last few years. There is however, only so many blows the place can take, and as a gesture of intent, London Continental has already closed the car park next to the venue that was rented by the company.

Martin told me that on a personal and financial level, the closure would be devastating, and that the compensation offered for the three year closure wouldn’t have even covered the constant upkeep required of the 200 year old building.

The clarity of the venues bleak fate was emerging at this point in conversation, so I asked Martin what he thought would become of the venue; “I think they’ll knock it down and build a Star Bucks here… I honestly think it will be a Star Bucks.”

As a Grade II listed building I was of the opinion that the venue was safe from the threat of demolition at least, and that it might have been a strong point for council to argue in the terms of the venues continued existence, after they made some noise about “alternative options”.  The council however gave the green light some time ago, and when I asked Martin what they’d come up with he shrugged and said he was still waiting to hear anything, “It won’t make a difference that it’s a listed building, the Tommy Ducks pub was listed and the council had that bulldozed.”

The venue has already once in its history been reconstructed when a previous rail development forced it to its current location, but Martin isn’t optimistic about a repetition of history, “it’s a matter of where we’d get moved to and the fact that moving would probably shut us anyway.”

He also mentioned that if the venue did somehow survive three years in the obscurity of a closed road in a run-down area blocked by construction, there was the likelihood of another three year closure with further plans of rail development. 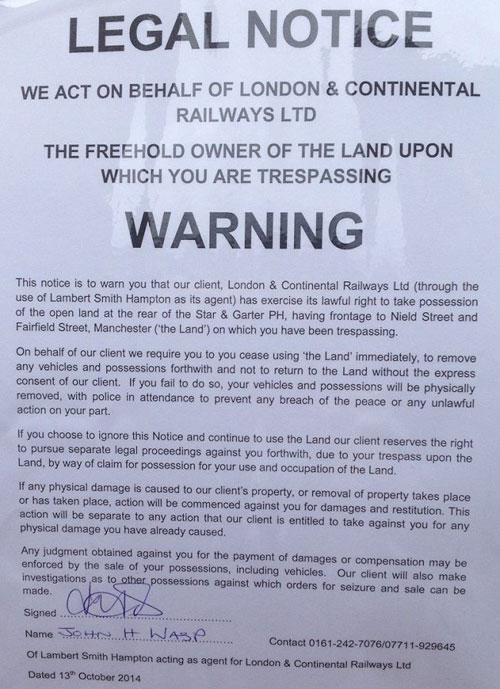 So, there’s the crux of the matter; the bull dozers are almost audible and the only thing to console the project of a lifetime is a bag of shit and Government extortion…It shouldn’t come as a surprise to anyone that history, culture and art are just commodities to talk about when it’s convenient. Unfortunately, they’re not worth anything up against the profits at stake; and when this business is done with, they’ll pat themselves on the back for the areas re-generation with pretzels and coffee in hand.

The Star & Garter‘s breed as venue will probably die with it, in Manchester at any rate. It’s is too honest a place for the high street; the last of the dive’s. Like a loyal old blind dog in the face of a high speed train not even bothering to blast its horn.

The future of Underground music in Manchester is starting to look grim: Noise restrictions, 4.50 cans of lager, being turfed out at half ten from a venue as students wearing onesies push past for their free shot of sourz, at hit student night “PJMALOLZ”.

Maybe the Northern quarter will sporadically provide relief, but probably not; the Penny farthing riders will have descended on mass by this point; a parade of tattoo sleeves and sculpted facial hair mindlessly consuming any beverage with “craft” in its name and unsatedly devouring pulled cauliflower burgers.

The Star & Garter has put on most of my favourite gigs on over the past few years; the likes of Bongripper, Samothrace, Dopethrone, Church Of Misery and countless other mid-sized events that put control in the hands of the promoter which are not limited to, but include Grief, Unearthly Trance, Ufomammut, Wino, Acid King, Weedeater, Yob, Baroness, Kylesa, Sons Of Otis, Beehoover, Bell Witch, Goatess, Windhand, Witch Mountain, Tombstones, Årabrot and hell even Conan’s first ever gig! There is no other place as easy going, where two hours past closing time the bands still playing and the doormen are talking happily to the customers about music outside.

This is the death of the last real venue compatible with underground music in Manchester, all we have to look forward to now is the transformation of every venue with integrity, into some terrible version of Fifth Avenue or the Northern Quarter, where the charade with live music events is becoming difficult and transparent.