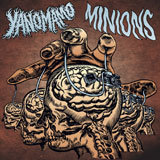 Existing in that narrow vacuum where the only bands in existence seem to be EyeHateGod, Sleep and Electric Wizard, Australian wrecking crew Yanomamo slot seamlessly into the line of bands who’ve based their entire output on crossing the proverbial streams, those three titans of Sabbath worship have been pissing out since the early 90s.  Honestly, the only thing that’s in any way surprising about this band is that their name doesn’t feature the words “Weed”, ”Electric”, “Demon” or “Bong”, such is the familiarity in sound.

Qualms about their falling perhaps too easily into a specific pigeonhole aside, new one track offering Minions is an enjoyable enough track, even if it does come across like a patchwork of their influences. Riding in on a spooky organ (dis)chord that lingers away in the background at various points, it’s straight into the kind of zombified Iommic boogie and snarled vocals that Iron Monkey and EyeHateGod made their own.

What they have going for them straight away is some articulate riffing and skillful drumming, which both keep things moving along nicely rather than resorting to knuckleheaded bludgeon. There’s a solid groove throughout before the tempo shifts into the more rocking middle section, and then it just sort of peters out under some Oborn style vocals at the end. They can write a song, that’s for sure. They perhaps need to end them a little more interestingly but otherwise, they know what they’re doing.

Bands like this are always a difficult one to assess on their own merits, as the sheer transparency of the inspirations behind the music can veer from homage to unintentional parody. I’m not entirely sure just going on one track what end of the spectrum they’re nearest to. Nevertheless, going on this track there are certainly less accomplished bands doing this kind thing, and it’s an enjoyable enough slice of mongo rifferama.