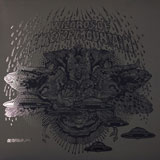 Esteemed Shaman Editor: “Hey Ollie, would you like to review the new one from Wizards Of Firetop Mountain?”

OK, it may not have happened exactly like that but it’s not far off. I will confess these guys are a new name for me but I can tell you there are two things you probably need to know about Wizards Of Firetop Mountain; they’re Irish and the rock the fuck out!

It does strike me that there is an increasing number of bands who are throwing aside the genre rule book and just rocking the fuck out…because there is nothing better than rocking the fuck out and people love listening to and watching bands that rock the fuck out. Rocking the fuck out is one of the best things in life and Wizards Of Firetop Mountain know it. There are elements of 70’s rock in there, elements of the NWOBHM, maybe a little punky fire for good measure in their twin guitar, balls-to-the-wall approach to having a good time. You can almost smell the denim, leather, motorbike oil and patchouli as you listen to this…it reeks of a time when smoking was allowed in pubs and no-one knew it gave you cancer, craft beers didn’t exist, TV only had 3 channels and people actually thought Little And Large were funny…and well before nu-metal and emo took a knife to the soul of heavy rock!

OK, I’m going to do the lazy reviewer type thing and throw a few bands at you as reference points… Motörhead, Saxon, Iron Maiden, Thin Lizzy, Grand Funk Railroad, Diamond Head, Witchfinder General and more recent bands such as Carousel and Lecherous Gaze…but fuck it, all you really need to know is that Wizards Of Firetop Mountain rock the fuck out!!!

This self-titled release is only 5 tracks long and over way too quickly so hopefully this is a taster for more to come. If not, when it’s over, just stick it on again. Wizards Of Firetop Mountain are recommended for anyone who likes to rock the fuck out…if you don’t like to rock the fuck out…well, then there is no hope for you…your soul is already dead!