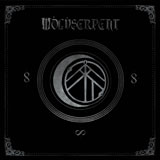 When Boise, Idaho duo Pussygutt reinvented themselves as Wolvserpent with the release of 2010’s incredible debut album Blood Seed, it was more than just a mere change of monicker; it reflected their transition from sparse, abstract dronescapes towards a more structured, malevolent sound that put them within the wide-ranging classification of metal, albeit at the outer fringes. The blackened doom they conjured with that album held me utterly captivated, so much so that it was the very first album that ever moved me to try to put into words what I felt for its haunting, otherwordly ambiance. Listening to it again many times after my initial review, I don’t think I’ll ever adequately describe the feelings it evokes, nor the nightmarish worlds it creates within my mind.

When the Perigaea demo became available late last year it coincided with a dark, isolated period in my life, and quickly became my escapist soundtrack, a creepily comforting collection that I would retreat to time and time again. The band’s assertion that the demo was only “the early stages and younger concepts” that would inform the finished work, and that it would be “an entirely different manifestation of the ideas heard on the demo” made me eager to hear where they would take what was already an accomplished recording and concept.

The culmination of a two-year writing and re-writing period, with the finished album recorded with renowned producer/engineer Mell Dettmer (Sunn 0))), Boris, Earth), the release of their sophomore album Perigaea Antahkarana is upon us.

Stepping through the ‘Threshold Gateway’ the silence dissipates like a fog, the whisper of wind heard whipping across this barren soundscape is soon joined by the caws of a murder of crows and an underlying ethereality, and you find yourself already trapped in the world this album evokes. As the crackle of fire slowly burns out, the last embers dying as you are plunged ‘Within The Light Of Fire’.

Considering that Wolvserpent is comprised of only two members, Blake Green on guitar, vocals, and keys, and Brittany McConnell on drums, percussion and violin, the way they build up the various layers in each song without them sounding cluttered or over-thought is miraculous, and their use of loops and effects pedals to produce such a wide variety of sounds is especially impressive in a live environment.

The tumultuous tremolo of steadily increasing layers of violin is soon joined by oppressively heavy guitar and ritualistic percussion. The gradual formation of layers in the same expansive composition on the demo is replaced here by almost instantly crashing into the main theme. With so little build-up to this point in the track, it’s slightly jarring, but the sense of disorientation works well with the hypnotic, cyclic pattern of the riff. The guitar, richer and deeper than on the demo, is soon joined by indiscernible vocals of a similar timbre, putrid expulsions from the larynx of some wraith-like being. If this sound isn’t sending chills up your spine, then your subarachnoid space isn’t functioning properly, and you should seek medical attention.

The track progresses through several movements, before the layers of violin and noise are stripped away to just guitar and drums, locking into a funerary procession before once more wrapping the basic rhythm in layer upon decrepit layer of groans and howls, like death shrouds. There’s a moment of brief respite before the reanimated riff shudders back to life, soon joined by skulldrilling bursts of violin. This horrid passage lumbers along maliciously for the remainder of the track, before decaying into the distance.

The sound of birdsong that accompanies the opening strains of ‘In Mirrors Of Water’ act as a palette cleanser to the foul taste left by the previous track. The haunting, mournful quality of McConnell’s violin playing here reminds me of Warren Ellis’s soundtrack work, and over the course of the track its allowed to develop and envelop the listener fully. The depth of solemnity expressed in these gentler passages elevate these exercises in ambiance above the level of mere introduction, they work to both compliment and contrast the harsher sounds to create a complete experience, an all-encompassing atmosphere. Wolvserpent have not simply written ‘songs’, they have created an aural environment that will flood your imagination, like all the best art does.

Throughout this section of the track, there’s a vague sense of unease as by now you know the murky depths they are capable of plumbing, and even the relaxing babbling brook that can be heard underpinning the violin feels designed to lull you into a false sense of security. When the shimmering drones arrive a third of the way through, that feeling of ‘calm before the storm’ is heightened further. Eventually the violins slowly fade away when the percussion kicks in around the halfway point, but rather than signalling the start of any particularly rhythmic section, it’s more a return to the more abstract compositions the duo explored as Pussygutt.

Eventually everything coalesces into a sort of 45-at-33 black metal, and the track is almost unrecognisable from it’s origins. The malicious undercurrent that always threatened to rear it’s head has done just that, with jagged, writhing guitars, martial drums and tortured growls. The track stretches on and on to breaking point, culminating in a frenzied climax before collapsing to a crawl and as the final waves of distortion ebb away, the birdsong and brook return.

The single chime of a bell signals the commencement of ‘A Breath In The Shade Of Time’ before the return of McConnell’s violin, this time with a raspier, keener edge. The fire still burns throughout this track, lending a sense of continuity to the overall atmosphere of the album. What comes next is a passage that’s cinematic in scope, the strings swelling to form some sort of elegiac orchestra of the damned. That seems to be the main difference between Perigaea Antahkarana and it’s embryonic demo form, the production quality has increased significantly, lending moments like this a rich, sweeping epic quality. Given the overall length of the recording, it feels more akin to a film soundtrack than an album in the traditional sense.

The distant blackened drone and vaguely eastern sounding melodies that comprise the latter half of the track feel somewhat vague and directionless, so it’s a relief when ‘Concealed Among The Roots And Soil’ wastes no time in announcing it’s doomed intent with an immediate blast of distortion, the aftershocks so intense it’s almost as if you had your head pressed right against a wall of Sunn stacks. The notes stretch and warp, eventually disintegrating, as Green’s deep roars re-introduce the foreboding dread. The multiple tracks of guitar heard here have a woozy, swaying tone, the first of many similarities to the first track proper of the record. The sense of familiarity, of recollection is present throughout this track, so when the doomed trudge finally comes to an end, and with it the return of the ever-circling Corvus Corvidae and the eternal flame, the ouroboric nature of Perigaea Antahkarana is revealed.

At 81 minutes this is not the sort of album you’ll throw on for some easy-listening, but if you’re willing to dedicate yourself to it, to submit to an awakening of your atavistic instincts, it’s one of the most rewarding immersive experiences that metal on the more avant-garde end of the spectrum can offer.