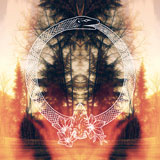 Piano doom. Those are not two words that in all honesty I expected to write at any point this year in a consecutive manner, but there’s a first time for everything. It’s not like we can’t be having smashy smashy drums and woarghhhhh guitars at all times of the day now can we? Manchester-based GHR Leeming rather agrees as he casts his first spell-binding echoes from his in-wet Wilderness Hymnal song sheets with the Transmutation EP out this month on his very own Black Earth Recordings.

Combining Leeming’s multi-instrumental talents alongside his colossal baritone vocals and also featuring John Simm (Cleft, Mothertongue) on drums and Rory Vallely (The Construct) on additional guitars, Wilderness Hymnal is an aura-soaked one-man vision rather than sitting as a band in its strictest traditional form. Across nineteen soothing, yet thought-summoning minutes, Leeming extends out his hand for you to accompany him on a journey into his misty, sci-fi ether; bound in wisdom and a solemn sense of abandonment, certain only of his mournful repose and a passion for deeply atmospheric darkness.

Across the likes of the spacey Arc, hints of Ulver collide head-on with the mysterious beauty of Bjork and even mid-era Pink Floyd. Leeming’s voice dominates, yet slides sleepily by behind his choral organ compositions and artistic synth patterns. Equally, the rainy wake of Torsion flaunts the subtle Alexander Tucker-esque combination of drone, psyche and ambient acoustic music which bounces between Leeming’s delicate key-work and his powerful hypnotism behind the mic. James Plotkin’s legendary mastering is essential to the mix as electronic effects galore glisten atop a pastiche of folk influences that range as far as Bo Hanssen, Tori Amos and Sunn O))).

The press release mentions a “bizarre violence” afoot these three tantalising tracks, but personally I find only remorseful sadness and an eerie call for calm even on the more upbeat and traditional sounds of Phosphor. There’s a clear nod towards the modern-day doom ideologies of Chelsea Wolfe and even Neurosis, but the Wilderness Hymnal sound overall is a more ancient, noble tone less favoured by the more eviscerating doom goliaths of today. Yes, its doom in some ways, but it’s the doom of a wooden fishing boat being run aground in miserable storm conditions off the west coast of Ireland rather than a mechanical Godflesh-eating giant crushing you with a volley of pulverising riffs in Satan’s underground lair.

Cupped delightfully in Leeming and Simone Gastaldon’s kaleidoscopic forest-fire artwork and topped with the mystique of a circular ouroboros, Transmutation is a thoughtful and psychedelic beginning to Wilderness Hymnal’s first chapter of mournful bleakness. As long as you’re not out on a riff witch-hunt, then Transmutation could be a surprise new favourite for you if you favour the ethereal and expansive realms to which an organ can truly descend.

Want more piano-doom in your life? Then why not step into the Wilderness and experience GHR Leeming’s moving Hymnals for yourself.