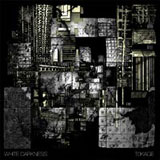 Dread. Unease. The Ain Soph Aur trickling down into creation. The white hot oblivion of forcible unconsciousness. The inescapable fear of nightmare. All of these things come to mind whilst contemplating the music and chiaroscuro name of White Darkness.

Mining similar underworlds as Khanate and Gnaw Their Tongues, White Darkness are the desiccated husk of what was once Doom Metal. The skeleton is there – snail’s pace percussion, the funeral dirge – but the meat has long since withered on the bones, leaving a mere shell and an echo of what once was. The malevolent ghost of something other, White Darkness are Qliphothic Doom Metal, at once haunting and haunted, stalking the dreams of the listener and making the hairs on the back of the neck prickle.

The otherworldly strains of ‘{echo internal|type=LUST|name=GASH ()|source=null}’ open Tokage, steeped in dreamlike ambience and echoing deeply. This is latter-day Earth, stripped of warmth and  filtered through the lens of David Lynch at his creepiest – echoing guitars chime into the void as hissing, sighing sounds, like steam venting through rusted pipes, fill the air.

The Lynchian vibe carries through into ‘hHi|d4Ee’, as the haunting Angelo Badlamenti theme for Twin Peaks is recast as a brooding, glowering thing of ominous dread, built around swelling see-sawing orchestral chords. It is this track that most brings to mind The Kilimanjaro Darkjazz Ensemble, of whom White Darkness mastermind Jason Köhnen is also a member.

Third track ‘Messe Noir’ amps up the dread another notch, building its foundation on a pulsating, throbbing black-as-pitch synth drone, around which orbit half-heard atmospherics. The funereal drums further add to the sense of encroaching dread, as does the headlong tip into a near silent abyss three quarters of the way through. Ghostly piano shadows the drone upon our return to ‘normal’ service.

The skin crawls during ‘FF0000 Rituals’ as the unearthly whisper of guest vocalist Rachael Kozak insinuates gravely and a tremulous guitar carves deeply unsettling shapes in the aether, recalling Scott Walker’s ‘Jesse’ from his unheimlich masterpiece The Drift. Kozak’s voice becomes an inhuman croak as the song picks up velocity, driven by a throbbing whirl of synth, creepier than anything Black Metal can manage. This is not pantomime dread, this is the real deal.

The crack of the snare cuts through the thick, stifling air of ‘RMNNTs’, wrought with drones and strange airs and atonal clusters of sound torn straight from those classical masters of pure dread, Ligeti and Penderecki.

‘You are the interactive data mutant.sHIVER/sHIVER//sHIVER///’ is almost light, in comparison to the rest of Tokage until a needling drone is left hanging in the air midway through and proves to be tonally very uncomfortable indeed. Even a slurred melodic synth line cannot detract from its spinecrawlingly piercing sound.

‘The Volume of the Enclosure’ is literally the end of the line. A thick blanket of distortion swathes the whipcrack snailspace drumming that is the body of the track as Kozak’s vocal is stretched and distorted way beyond human sound into the realms of Skinny Puppy vocalist Nivek Ogre’s tortured snapping shriek, as all the while atonal swarms of guitar hang in the spaces between beats that sound like exploding bombs.

Tokage may be far from easy listening, but it is most certainly vital listening for anyone with the stomach for it and a taste for the aurally macabre. Don’t listen to it alone at night though, else you’ll be sleeping with one eye open and jumping at shadows, although something tells me that may well be the desired effect…