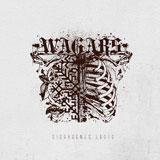 “We all are black metal trolls at some level. Dark and grim.” Something the band Wagars expressed in an interview, but also something that pretty much summed up their first self-titled album. That has changed a bit for the Latvians on the second record; ‘Sidrabenes Lāsts (The Curse of Sidrabene)’. The sound is less filled with black metal fury and the biting vibe of crust. It’s more natural and speaks more about the Baltic land and its nature, but the black metal troll has luckily not left their shores.

Dark clouds gather as the shrill guitarplay opens ‘Pelēkā rītā (In A Gloomy Morning)’. The northern winds that the band loves to invoke are coming in fiercely as heavy and tight layers of distorted bass pull up like a dense fog. The drum adds thunderous strength to it, somewhere from within this gloomy morning that is sung about with deep barked vocals (all in Latvian). In all its earthliness, the song sounds clear and achieves a sort of humble majesty. The track ‘Sidrabenes Lāsts (The Curse of Sidrabene)‘ displays fierce black metal, weaving an atmospheric sound pattern. The title refers to one of the last pagan castles, destroyed by the crusaders, and how it has been carried through the ages. The Baltics never fully embraced the new faith and that pagan fury can be felt in this song that sounds like the early Norwegian black metal bands combined with unrelenting crust punk.

What songs like ‘Bezgalīgā ātrumā (In an Endless Speed)‘ and ‘Zem Sventes (Under Svente)‘ clearly demonstrate the driven rhythm, which is more closely related to punk/death metal than to the cosmic chaos of black metal. Though constantly labelled as such, the roots of Wagars are not dabbed in corpse paint. Defining is the sound of drummer XedzaX, who has been active in a whole list of bands, but is known from death metal group Kapakmes and hardcore band Kastete. That can be heard and felt throughout the record.

Though the album title refers to a pagan stronghold, it’s still relevant to neo-pagan revivalists today and the lyrics deal with dark things of a looming apocalypse, the band is not a religious one in any sense. Songs like ‘Uz tumšo krastu (Towards the Dark Coast)‘ demonstrate the same dark gloom in style as could be heard on the previous EP, though a lot more dense. The despair of this song seems more particular to its theme of a desperate craving.